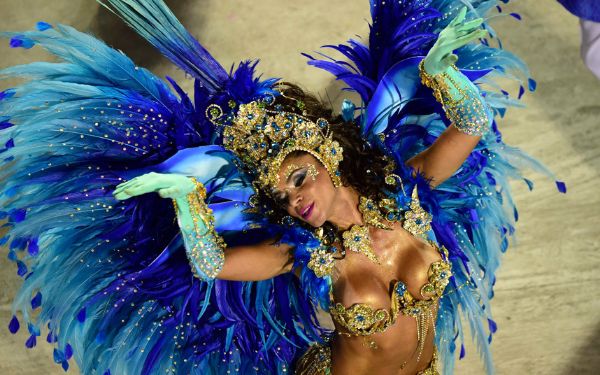 Every year, millions of people gather in the heart of Rio de Janeiro for what people refer to as the world’s greatest party. The Rio Carnival has a history of decades behind it and, as surprising and impossible as that may sound, it continues to grow as every day passes. We don’t know exactly at what point it took the turn and evolved from a street carnival to a worldwide event filled with music and explosive colors, but we do know plenty of other things. We have here 10 Awesome Facts About The Rio de Janeiro Carnival.

#1 The First Parade & Its Royal Guest

The first unofficial time when the carnival happened was in 1855, when a group of intellectuals created a parade that marched towards the house of the royal family, whom they asked to join in with the celebrations. Dom Pedro II, Brazil’s Emperor at the time, accepted the invitation and the rest is history. However, the first time the parades were actually legalized and accepted by police was only in 1889.

Despite the fact that this is when the first official street carnival occurred, celebrations per se were introduced all the way in the 18th century. They were carried over to Brazil by Portuguese immigrants, though at the time they bore the name Etrudo. The event itself involved groups of people gathering in the streets to throw lime water at each other.

#3 The Start of the Festivities

Every year, the carnival is kicked off on a Friday after a tradition which dates back to 1933. The mayor of Rio hangs the key of the city to King Momo, a figure in Brazilian mythology which is portrayed by various incumbents. Typically, King Momo is depicted as a fat, jolly man with a crown on his head.

#4 The History of Clothing

In the 1930’s, the typical attires of the attendees of the carnival mostly consisted of white clothes, which helped shield people against heat and reduced overall costs. The transition to the glamorous feathered bikinis we see today started slowly happening around the 50’s, when men began going out in the streets without shirts and women opted for the bikinis.

#5 The Hundreds of Parties

It’s difficult to try and control the biggest party on the planet, so don’t expect for it to be located in a single location where millions of people gather. There are a grand total of 587 parties all over Brazil, typically called “blocos.” The biggest one of them all is the Cordão Da Bola Preta, a celebration found in the center of the city which draws in around one million people every year.

If you look at any postcard that advertises the Rio de Janeiro Carnival, the first things you’ll be able to notice are the floats and the dancers clothed in skimpy colorful bikinis rich in feathers and shiny decorations. Despite the fact there is a lot of sexiness to the dancers’ outfits, the Sambodromo actually has a penalty for nudity, so you won’t be seeing anything else anytime soon.

#7 The Time of Profit and Expenses

Money plays a huge part in the Rio de Janeiro Carnival. The Samba Dance School invests around $5 million every year for preparations, but all expenses are always earned back. In 2015 alone, Rio had an influx of one million tourists which spent hundreds of millions of dollars during their stay.

#8 The Highlight of the Celebration

Even though the dancing and the floats are definitely eye-catchy, the most spectacular part of the carnival is represented by the competition held between various samba schools at the Sambodromo. Tens of thousands of people gather to witness the spectacle.

#9 The Tale of the Portela Samba School

Since we’re talking about the competition at the Sambodromo, here’s a fun story. The Portela Samba School, champions for over a decade, allegedly decided that they needed charms to win the 1974 competition. Some members apparently refused to go through with the charm ritual and, this, in turn displeased the spirits. Needless to say, after this incident, the Portela Samba School hasn’t won anything else.

#10 The Preparations are a Tremendous Task

It’s not easy to coordinate everything that needs to be in order for the celebrations. The entire week before the carnival is closed off, with all activities ceased (with the exception of tourism services) and dedicated to the checklist for the celebrations. Samba schools, specifically, are very busy since the dancers need to perfect their routines and the costume designers need to outshine themselves.