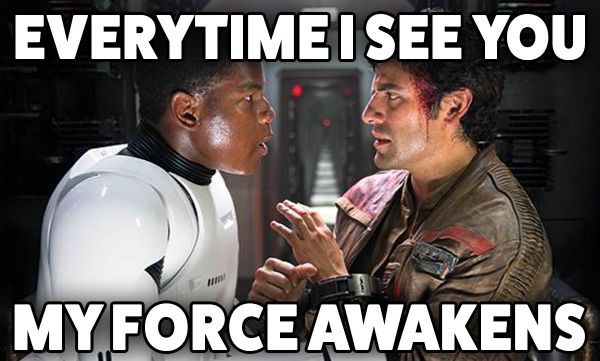 You’re a Star Wars fan, the crush you are trying to woo is a Star Wars fan. What is there to do? If you hit them with some smooth Star Wars pick up lines and they respond positively, then you will know that you are made for each other. That’s how it works.

We know that there was a time when it was literally the most uncool thing ever to hit someone up and drop a cringe-worthy and awful pick up line, but times have changed.

Hitting on someone with one of those is going to add an edge of welcomed humor to your interaction, assuming you know how to properly deliver the fact that you’re joking.

So, in case you’re not feeling creative enough to come up with your own smooth line, here is a collection of 10 Awesome Star Wars Pick Up Lines that are guaranteed to make your significant crush grin like a fool.

Alright, this one is smooth. A bit too smooth, maybe. After all, not everyone is built to be able to understand the unique combination that is the bizarre appeal of puns involving a play on words and sounds.

How about you try that Tennessee joke first to see if your crush gravitates in that particular area? Who knows?

Anyway, let’s move on. This isn’t the Obi-Wan of the Star Wars pick up lines we have to offer.

Let’s get something out of the way first. Just how much into Star Wars is your crush?

This is vital in order to determine whether these Star Wars pick up lines will actually work or whether you will just end up with a stinging slap on your face.

Imagine the awkwardness of having to explain which buns you referred to.

#3 “Is that a lightsaber in your pocket or are you just happy to see me?”

You know what? Sometimes all you need in your life is a little bit of simplicity and a taste of good old classics.

This is a line we know all too well by now, but adapting it to fit George Lucas’ legendary franchise just shows that you have the wits and humor to blend on a common ground.

#4 “You’ve been looking for love in all the Alderaan places.”

Little pro tip – you might want to practice pronunciation in the mirror first. There’s no shame in that!

You know what would be even more shameful and disappointing? For this pick up line with a ton of potential to flop because of mumbles of terrible delivery. It’s thanks to gems like this why these cheesy approaches sometimes really work.

#5 “Captain, being held by you is enough to get me excited.”

We know the technical meaning of the term “pick up line,” but this is all about Star Wars pick up lines and, come on, they’re a bit limited, aren’t they?

Given that it ties in with the famous franchise, the fact that this one is more suitable for a point in your interaction when things have already started to steam up shouldn’t matter.

Look, they don’t even have to see the prequels, read the extended material, or own a bunch of merchandise.

If they’ve seen Star Wars, even a billion years ago, this should be enough of an obvious reference to crack a smile.

#7 “Did it hurt when you fell from Cloud City?”

Turn possibly one of the most cringe-worthy, dated, and clichéd pick up lines into a refreshing take that might actually get more out of your crush than a prolonged eye roll.

We’re not saying that it’s amazing, but it’s entertaining enough to make it seem like you’re kicking off a conversation by simply pretending to be awkward. Sweet!

But, above all, it’s probably one of the most accurate of all Star Wars pick up lines thanks to the sheer influx of references per second.

You get to possibly swoon a cute person and also show off some of your basic Star Wars knowledge.

Careful with this one, you might blow some minds.

You get some neat Star Wars references, a touch of a classic poem, and some witty rhymes all wrapped up in one nice tortilla of a pick up line with extended odds for success.

Here is your chance to swoon someone with one of the Star Wars pick up lines that dive a little deeper than the basic knowledge.

Put them to the test. No one is able to pretend to like Star Wars and get away with it!

It is absolutely essential to make sure that the person you’re using Star Wars pick up lines on is a huge fan of the franchise.

Otherwise, they aren’t going to get your joke, and you’ll end up looking creepy or weird. Also, you could get slapped, and you don’t want that to happen.

Make sure these things are all true before using any Star Wars pick up lines:

While the list above are our absolute favorite Star Wars pick up lines, there are so many others out there. Here are some additional ones to try out:

Remember, only use one of these Star Wars pick up lines if you’re certain that the person you’re using it on is really into Star Wars.

If they’re  not, they won’t understand the joke, and think it’s just weird or rude.

Best of luck… or better yet, may the Force be with you!

10 Best Netflix Documentaries That You Can Watch Right Now