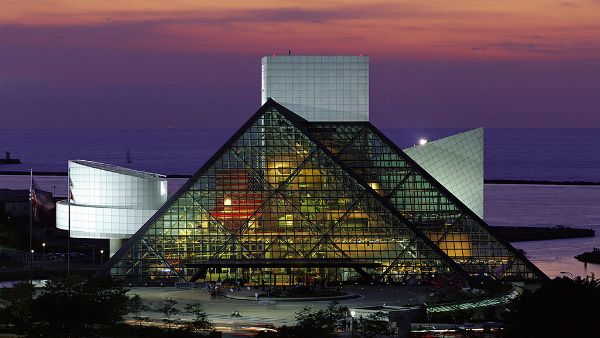 There are museums all over the world dedicated to the strangest of things, as some of the articles on our site have proven. Whether we’re talking about an Underwear Museum or other things that can’t be mentioned without losing the PG-13 rating, human creativity knows no bounds. Do we really need them? Maybe not, but they’re definitely hilarious. Either way, the Rock n Roll Hall of Fame… isn’t one of those examples.

A museum established in 1983, the Ohio Rock n Roll Hall of Fame has been built with the sole purpose of honoring those who have contributed to or influenced the music industry one way or another. Although it mostly focuses on the rock n roll side of the industry (as the name suggests), it also includes inductees that didn’t have much to do with this genre.

They honor the important artists of the world and now we honor them, by providing a list of 10 Fun Facts about The Rock And Roll Hall of Fame.

The Rock n Roll Hall of Fame Museum came to be by the will of Atlantic Records in 1983. Its initiator was Chairman Ahmet Ertegun and a team consisting of an attorney and a Rolling Stone editor among others. Although its inception was back in 1986, the Rock & Roll Hall of Fame had no official location. Before it was eventually established in Cleveland, Ohio, other options had included Memphis, Detroit, and New York City.

Speaking of beginnings, the first nominees of the Hall of Fame were James Brown, Ray Charles, Chuck Berry, Sam Cooke, Everly Brothers, Fats Domino, Jerry Lee Lewis, Buddy Holly, and Little Richard. Oh, Elvis too, but I don’t see how he contributed in any way to the rock ‘n’ roll industry, right?

Let’s return briefly to the matter about the location of the museum. How did Atlantis Records eventually settle on Cleveland, anyway? Well, this has something to do with petitions, polls, and finances. In 1986, a USA Today poll asked where the location of the Rock n Roll Hall of Fame should be and Cleveland came out on top. When put up against Memphis, the Ohio city also came on top thanks to a petition signed by over 600,000 fans which requested its use as a permanent location. It also helped that Cleveland seemed to really want this too, local authorities offering over $65 million as financing for the construction of the building.

The term “hall of fame” clearly implies some sort of longevity, which is why inductees need to have at least twenty-five years of activity before they can become eligible nominees. Or, better said, they can elect musicians only after a decade and a half since the release of their first commercial record. Selecting these nominees is no easy task for the Hall’s committee. After analyzing possibilities, they mail ballots to over 600 musicians and people involved in the music industry.

There are actually performers that received more than one induction. This happened because they received the honor for their solo careers, as well as for their careers as members of a group. Musicians in this situation include Michael Jackson (solo and with the Jackson Five), Neil Young (by himself and with Buffalo Springfield), and Paul Simon (who is also an inductee with Simon and Garfunkel).

Other instances of a double induction include artists who have been members of two bands, which is the case of Jimmy Page (with The Yardbirds and Led Zeppelin) and David Crosby (part of Byrds and Cosby, as well as Stills & Nash). Eric Clapton is the only inductee who got three inductions: as part of The Yardbirds, Cream, and as a solo artist.

6. What about The Beatles?

There can’t be a Rock n Roll Hall of Fame without the Beatles. They’re obviously inductees, with almost all of them also receiving inductions for their works as solo artists. I say “almost,” because there is one Beatles member that wasn’t an inductee for a solo career until 2015 – Ringo Starr. I think this is likely due to the fact that “he isn’t even the best drummer in the Beatles,” as the iconic saying goes.

You’d think that anyone would consider it an honor to find their name on the list of inductees in a hall of fame, but that wasn’t the case with The Sex Pistols. The British punk band received the nomination in 2006, but they not-so-subtly turned down the induction. In their response, they harshly bashed the museum in words that we can’t reproduce for the sake of keeping things classy. If it weren’t for that last piece of info, you may have thought they did this out of an excessive act of modesty.

If we look back at 2016, the inductees are Cheap Trick, Chicago, Deep Purple, Steve Miller, N.W.A., and Bert Berns. Does anyone on that list surprise you? Yeah, I thought so. N.W.A. is the only non-rock’n’roll group in that listing. The seminal gangsta rap crew received the honor that year largely due to the success their biopic, Straight Outta Compton had.

However, they are not the only rappers in the Rock’n’Roll Hall of Fame. The first ever rapping crew the museum inducted was the legendary Grandmaster Flash and the Furious 5, back in 2007. After them, we could also see Run-D.M.C, the Beastie Boys, and Public Enemy. And now, evidently, N.Wit Attitude.

The Rock n Roll Hall of Fame receives its fair share of criticism. Many people accuse the foundation of transparency and of actively ignoring opinions and petitions. This was also the center of a controversy from 2007, when soon after that year’s induction ceremony a Fox News publisher mentioned how they didn’t nominate Dave Clark Five, despite having plenty of votes. This brings in discussion another controversy, which focuses on the fact that the members that decide inductees aren’t actually professional members of the music industry.

Controversial or not, the Rock n Roll Hall of Fame has only the right intentions. It wants to honor the greatest contributors to the music industry and that’s definitely an honorable deed.