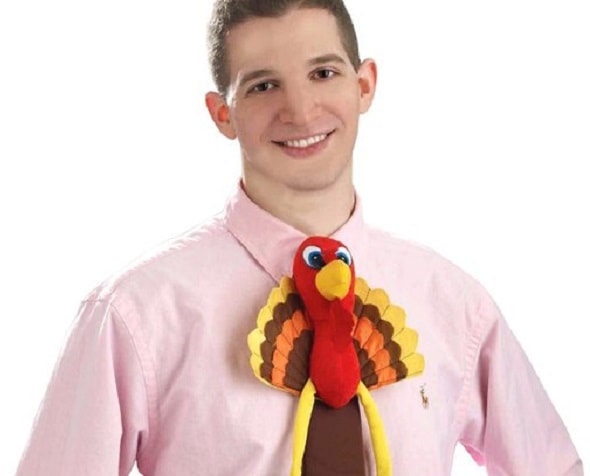 As people evolve, so does the world around us: fashion is no exception. We went from wearing mammoth fur clothing, to the extravagant dresses and wigs of the glamorously snobbish 18th century and, now, to 21st century’s incredibly diverse styles. However, women have always been notably luckier in terms of wardrobe diversity, while poor men have been stuck for several decades with the same old suit jacket and pants, polished black shoes, white button up and the plainest of ties. Fortunately, things are changing, and the latest fashion trends are defined by a complete lack of rules and regulations. Who cares anymore about mismatching colors or not wearing converse shoes with a dress? Fashion designers seem to be thinking the same, which is why they’ve broken all rules and have come up with a bunch of crazy, funny ties for men, that are definitely bound to bring you a bunch of criticizing stares at a business meeting.

Some of the weirdest things can be found in the world of online marketing. Websites like Amazon and ebay freely allow anyone and everyone to sell whatever they please, without too many filters. And this is how we came across this precious gem. You may be at first puzzled and wonder who on Earth thought that this was a good idea? Well, in the related content section, we managed to find a turkey hat and a turkey suit as well, so I think it’s safe to assume that it’s part of a Thanksgiving costume set. Imagine having a family dinner wearing that.

Whether it’s true or not, the message is funny enough to incite the smallest of laughs in most situations. Above being a hilarious accessory, it sounds like an even better gift to make. Best part? We won’t ever know if the person wearing it went along with the joke or if they genuinely had one of their worst Christmas mornings of their life.

We continue our list with yet another incredible product of the online marketing zone: the bacon tie. While some of the other funny ties for men on our list seem to be fitting in somewhere, it’s hard to picture a situation where you could wear this tie. It’s probably not good for a date, it’s definitely a terrible choice for an important contract signing meeting and you could get away with it at a party, but only if it’s food themed. Perhaps some things are meant to be worn for attention and that reason alone.

The first question that might pop up in your head: were they even trying? I imagine this is what the final product of someone who’s been designing ties for over thirty years and has been hating every minute of it looks like. You just pick a background color, find the nearest rubber duck, take a photo of it and nonchalantly print it on the tie: done! All jokes aside, it was definitely intentional and it might just take the cake as one of the most hilariously uninspired tie designs ever.

There’s no secret that the Internet loves cats. The Internet also happens to really love outer space, as seen in the recent explosion in galaxy print clothing. We’ve already established how many odd things you can find on Amazon and ebay. Now, combine all of these and you get a grumpy taco wrapped cat floating in space. Do we need any further explanations? Probably not, since there are so many questions that we’re better off with them unaddressed.

Although it’s not necessarily one of the most laugh inducing funny ties for men, it’s definitely one of the most creative. Whatever you decide to match this tie with, it will stand out like a mountain in the middle of the sea. If you’re having a bad hair (or anything else) day, find yourself a pencil tie and it’s guaranteed that people’s eyes will be glued to it instead.

To be honest, it’s not Scooby Doo himself that drew our attention to this marvelous tie. It’s the fact that there are probably tens of Scooby Doo’s printed on it. But, believe it or not, the designer isn’t making a revolutionary fashion statement with his creation, since this particular style has been around for a couple of years and it doesn’t seem like it’s dying anytime soon. With a quick search, you can find similar ties with a diversity of characters and even people.

This one is a veteran of clothing design. Money shirts, pants, hats, jackets and even shoes have been around for a while now and they’ve had their ups and downs in popularity. With the recent ascension of strange patterns, it seems like the money prints are rising along with them. No matter how you put it, any piece of clothing with an image of raining money stamped on it is hilarious. Can you barely afford a packet of gum, and you wear a money print? That’s some good, old irony. Are you a CEO who bathes in his own cash thrice a day, wearing this money print tie? It’s such a display of excessive boasting that it actually makes a perfect satire

While the other competitors on our list appear that they have been created with the full intent to crack a smile, this one is just plain confusing. It’s absurd enough to make you wonder if it was a joke, but subtle enough to make you consider that maybe this one was meant to be if only a tiny bit serious. So, which one is it? The best answer is another question; what would you do if you saw someone wearing this tie? If “ignore it and pass it off as a sober accessory” isn’t your immediate answer, I think we have a winner.

For the last spot we saved something that isn’t just a singular case. No, ties exhibiting various cartoon characters in diverse situations seem to be all over the novelty ties market and, although eccentric, if they were made with the intention to be funny is rather questionable. There’s nothing wrong with adults appreciating their childhood memories, but perhaps they should limit themselves to a less flashy display of their interests.

With this top, we’ve done more than appreciate some of the best funny ties for men: we’ve learned to appreciate how infinitely amazing some people’s creativity is. Despite the satirical tone of this article, it is, in fact, true that restrictions in terms of clothing choices have considerably dropped. No one is stopping you from wearing your favorite bacon tie to your wedding, whether ironically or fully committed to your choice, though you need to accept the fact that you might not be taken too seriously.

10 Tips on How to Get Cheap Wedding Dresses