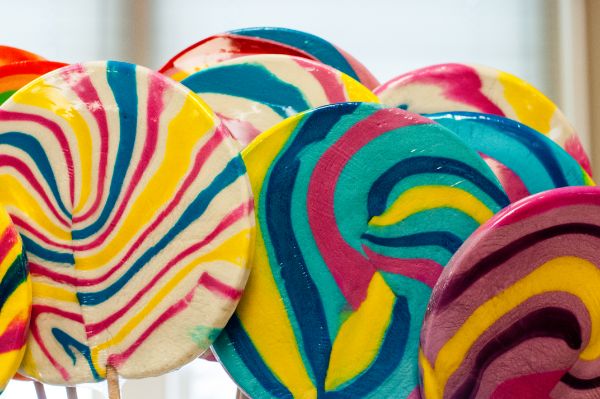 Candy is basically heaven for any person struggling with a sweet tooth. I say “struggling,” because everyone knows of the controversies around sugar based treats and most of the time, a sweet tooth also comes with a desire to shovel in copious amounts of mellifluous, glucose heightening treats. I consider myself to be one of those people both blessed and cursed with this common affliction, though I’m more of a chocolate junkie. Despite that, I doubt I’d ever say no to some sweetmeats or a coffee flavored caramel or even the classic jellybean bears. The only thing I’d probably gladly refuse and hurtle into the nearest crackling fire is licorice. I don’t know what kind of deal with the devil some people must have struck in order to be able to tolerate it, but fortunately this isn’t the topic of the article. Candies are more than just gems created to soothe and please our taste buds, they are also the bearers of some interesting backgrounds, which we’ve gathered to offer you a list of 10 Mind Blowing Candy Origin Stories.

You’re probably familiar with them, right? Just in case you aren’t, they’re basically nice little tubes filled with delicious sweets and they make an ideal portable candy bank. Suddenly craving some sugar in your blood? Snatch the nearest PEZ, pop the lid open and let the rainbow pour out. What’s even more interesting is the reason they were created to look like that. Their inventor was actually an avid hater of smoking, so he came up with the PEZ concept as an alternative to it. Their appearance is also meant to draw in smokers, as the lid popping strongly resembles the action of flicking a lighter.

Most of the time, when the word “experiment accident” is involved, there is also a “gone wrong” following after that. Fortunately, this wasn’t the case of Dubble Bubble, which resulted from an accountant’s passion for conducting experiments in his spare time. He accidentally found the recipe to making gum easier to chew, and its iconic pink color was also an unwilling choice, since it was the only shade available at the moment. I don’t mean to alarm you, but it sounds like we’re eating a mutant gum.

These candies were the creation of the first lozenge cutter, invented all the way back in the 19th century. You might be frustrated to know that, while some of us may never be able to travel anywhere interesting, these candies that strongly resemble chalk in texture, actually managed to. Admiral Richard Byrd decided to pack 2.5 tons of Necco Wafers for his journey to the South Pole, although it’s yet to be discovered whether all of them were consumed.

Believe or not, we almost lost forever the famous red colored M&M’s. This happened because some Russian scientists conducted an experiment in the 70’s, which was centered on the analysis of a dye called FD&C Red No. 2. The results concluded that the dye was really dangerous, as it was involved with the discovery of tumors in female rats. Obviously panicked, the public demanded the removal of the red M&M’s, which were briefly replaced with orange ones. Fortunately, the experiment was then proven to have been wrong, and the red candies were brought back.

Let’s get something out of the way first: these aren’t peanuts. Strangely so, they’re banana flavored marshmallows that merely take the appearance of peanuts. This very fact left people feeling very strongly about them, so the outcome is that you either love or completely loathe them. A product developer mixed Circus Peanuts with Cheerios, and the result eventually led to the invention of the popular cereal brand Lucky Charms. So, regardless of your personal beef with them, you have to give Circus Peanuts credit where it’s due.

Ah, yes, chocolate bars. Now you’re talking. Ever wondered how the famous Snickers bar got its name? It’s shared with Snickers, the horse of Ethel Mars, who died right before the bar was launched in 1930. To honor his beloved animal, it was decided to name the candy bar Snickers. Funnily enough, the farm where Snickers used to live was called Milky Way, the name of another of Mars Inc.’s most popular candy bars.

Some of these candies have some clearly defined origin stories, but lollipops aren’t among them. There are, in fact, several theories attempting to decipher the reasoning behind the name choice. Some say it was another name borrowed from a horse, a popular racehorse by the name Lolly Pop, to be exact. Another variant states that the name appeared during the Great Depression, when they were more commonly called “tongue slappers,” since in Old English, “lolly” equates “tongue” and “pop” is an equivalent for “slapping.” The last theory claims that the name is related to the old Roman “loli phaba,” which translates to “red apple” and could be a nod to the popular toffee apple delicacy.

You know those little, grainy like, sugary treats that sort of pop and fizzle when you put them in your mouth? This is what Pop Rocks were. But they were also behind an urban legend that spread panic among consumers. Some people claimed that a child exploded after eating Pop Rocks, something that cost the company dearly and forced it remove the candy from the shelves. Fortunately, it eventually made a comeback, but the urban legend still stands today.

Arguably the most famous candy “breed,” it’s also one of the most controversial, mostly because it’s made entirely from crystallized sugar. However, despite seeming like a dental hazard, there were several dentists who were behind the invention of the cotton candy machine, among other merits. Surely that must clean at least some of its bad reputation, right?

Although some producers choose to add a pinch of extra salt to their taffy, just to make them live up to their name, these candies aren’t actually salty. Allegedly, the name surfaced after a candymaker had his stock of taffy fall victim to a storm that soaked it in water from the Atlantic Ocean. When people rolled by to purchase some candy, he humorously referred to it as “saltwater taffy,” a name that sticks even today.

Well, I think the conclusion that we can draw from this is that eighty percent of the examples here have backstories that somehow involve accidents one way or another. So next time something doesn’t go as planned (especially if you’re into a sugary line of work), consider that you might be on our next 10 Mind Blowing Candy Origin Stories list.