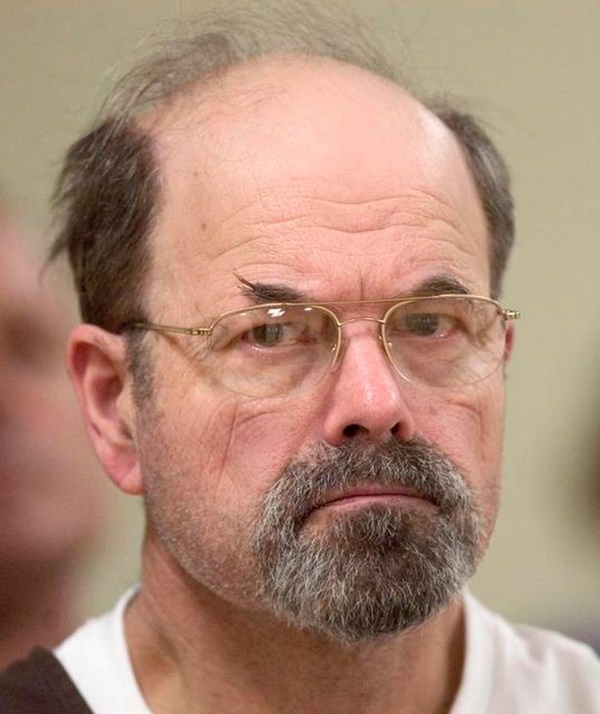 Dennis Rader (not Dennis Radar or Dennis Raider, as his name is sometimes misspelled) is an American born in 1945 who achieved notoriety for being a serial killer in the Wichita, Kansas area with 10 confirmed murders to his name, to which he confessed after he was arrested in 2005.

It is worth noting that the hunt for the BTK killer (as he was publicly known during his killing spree) lasted 31 years! That is, despite his killing spree stopping in 1991, which makes for an appallingly large time period in itself, taking into account that his first 4 murders, those of the Otero family took place in 1974, so we are talking about 17 years of activity in total.

What makes it more shocking is that he could have gotten away clean with everything, because his arrest in 2005 came after he re-surfaced, of his own volition, in 2004 and started sending letters and clues (including objects that had belonged to the victims and photographs of them) to local authorities and several media outlets.

You see, in 2004, newspapers and TV stations featured stories of the 30th anniversary of the first murders the BTK serial killer had done and the author himself was yearning for a return to his killing spree days after 13 years of successfully vanishing without the police having a clue as to who he might be (1991 – 2004).

So, who was the BTK killer in his day to day life? What caused him to do what he did? Was there anything anyone could have done to stop him? Perhaps identify him early on?

These questions might never be answered fully, and the reasons for which such individuals leave a bloody and puzzling mark on history and their societies might be forever beyond the grasp of the rest of their peers. But read below 6 BTK killer facts which are certain and might provide insights.

BTK comes from “Bind them, Torture them, Kill them”. And it is the name Dennis Rader himself requested be used when talking about him, in one of his letters to the press. As you can see, he was so comfortable with his killings and his ego sufficiently big that he felt like telling the world that the procedure he had decided upon when killing was important. It also served to cause anxiety in Wichita as everyone knew in advance what would happen to them if the BTK killer struck.

2. The image of a consummate professional

Is what Dennis Rader wanted to project both as the BTK killer and as an everyday working man.

Once he was arrested and his identity made public, people that had come in contact with him started giving testimony to the authorities about the Dennis Rader they knew.

A particularly interesting note, from a psychological point of view, is that several stories corroborate his own confessions in court that he was a careful planner.

In his day to day life, Rader worked for the home alarm systems company ADT from 1974 to 1988, which ironically gave the BTK killer access to people’s homes who had started enlisting the services of ADT specifically out of fear of the BTK killer. It also gave him the necessary knowledge to disable said systems.

Then, from 1989 to 1990 when the Federal census took place, he worked as a census field operations supervisor.

And ultimately, as a compliance officer and dog catcher in Park City, right up to his arrest in 2005.

Since, as the BTK killer, he meticulously stalked his victims, learned their pattern and chose them on a set of criteria which included escape routes for himself, his professions greatly helped him with this. Because they allowed him to move around a lot and interact with people from a position that wouldn’t raise suspicions.

Another psychological insight comes from the fact that the above-mentioned declarations given by people who knew him, agree that even in his work Dennis Rader loved to exert his authority and control over others and was very focused on the rules to the point of being overzealous in his attributions, as this dominance over others stroked his ego.

As opposed to the image that he wanted to promote, Dennis Rader was in fact an average individual, even an under-performer, judging by his below average grades, his blatant and frequent grammar errors that were commented on from his letters to the press (and initially thought to be on purpose, to confuse) and even the mistakes he made as the BTK killer.

On the very first murders, those of the Otero family, he failed to kill the father (John), mother (Julia) and daughter (Josephine) in his first attempt to strangle them, which led to them coming back to their senses after passing out and Rader having to strangle the father and mother a second time, while hanging the daughter from a pipe in the basement.

One can only imagine the horrible ordeal of these poor, first, BTK victims.

The first major legal mistake was that after hanging the girl, he masturbated on her legs, because the act of killing aroused him. His DNA recovered as a result of this action was compared in 2005 with a sample that the police managed to obtain from Rader’s own daughter, which, among other evidence sealed his case and got him arrested.

But that is not the only mistake he made, as the complications that took place when he went to kill Kathryn Bright demonstrate. Because although he unfortunately managed to kill Kathryn, her brother, whom she had unexpectedly  showed up with at home that night, lived. Despite being shot twice by Rader after the latter initially tried to strangle Kevin.

Though “I survived BTK” is something that just two targets can claim (the other being Anna Williams who showed up home very late, when a frustrated Rader had left her home), he is one of them.

His biggest one, though was how he was caught. He asked the police, via a letter, if a floppy disk could be traced, because he wanted to send them some more information like that. The police lied, saying that there is no way to trace a floppy disk. Rader sent it, and the police traced it back to him.

4. A wolf in sheep’s clothing

One of the most chilling aspects of Dennis Rader’s activity as the BTK killer is that it didn’t interfere at all with his everyday life. Rader was so cold and unaffected by his murders that during all those long 17 years of activity and 31 years of remaining at large, he never once slipped up or showed any signs of odd behavior, psychological backlash or emotion that would intrude on his “normal” existence.

He was married to Paula Rader (born Dietz), a long-lasting seemingly happy marriage in which he fathered two children, a son and a daughter.

But not only was by all appearances, a normal hard-working family man, he was also a congregation leader at his church, which he visited regularly and a boy scout leader as well. The later occupation being used by him as a perfect alibi, as he snuck at night from the various camps he went with children to perform some of the murders!

And nobody suspected anything. Not even his loved ones, who were shocked to find out that they are the BTK killer family in 2005, prompting Paula Rader to file and be granted an immediate divorce, because the judge considered that her mental health was in danger as a consequence of being portrayed and identified as the BTK killer wife.

His two children also distanced themselves from Rader, choosing different names from themselves. The daughter has just recently (around 2014) started corresponding with him by letter. The son, a Navy veteran, has not.

5. Blame it on the devil

In his testimonies in court, Dennis Rader said he in time figured out what made him do the deeds that terrorized Wichita for so long. And it’s not as original as you would expect. He said that the BTK killer persona was actually a consequence of being possessed by a demon. Which he even drew a few times.

He also claims that all serial killers in history, from older times to now have what he calls the Factor X in common, which is this demon, prompting them to do things that they cannot control.

However, he did not plead insanity at the trial and instead chose to plead guilty.

A more scientific and logical explanation that is for criminologists to decide is that, as modern such criminal minds theories claim, Dennis Rader’s behavior was a result of a long and complex etiological chain consisting of various interrelated factors which slowly led to the crystallization of his serial killer tendencies, as opposed to a sudden click which made it all happen.

A clue in this direction is that it has been confirmed that Rader used to strangle cats and other animals in his childhood. The reason for these particular childhood acts, like a possible trauma or abuse, however has not been made clear yet.