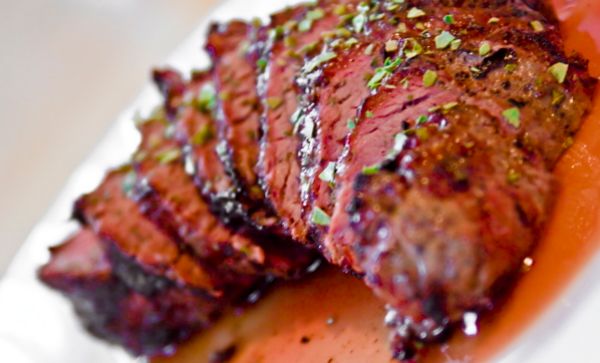 Summer heat is slowly dying out and leaving room for bearable temperatures. It’s not just the fact that we’re celebrating that we won’t be boiling from the inside out anymore, but this also means that going outside won’t be such an extreme trip to the heart of a volcano anymore. And nothing says “outdoor life” quite like some nice grilled goodies. But you can go full sophisticated even with your steak curtsy of the wonders the best steak marinade recipes can bring to the table (get it?)

Although every piece of meat will surely benefit from a good marinade, skirt and flake steaks are the ones that you can truly test out the results on. To soothe your taste buds, we’ve compiled a list with 10 Best Steak Marinade Recipes To Test Now.

Maybe you’re not ready to take it next level and to wholly dip your steak into a pool of spices and exotic tastes. And you know what? That’s perfectly fine. Sometimes simplicity is the absolute and there are plenty of recipes which are implosions of tastes even with the basic combination of salt, pepper, and some coriander seeds. All it takes is a well-cooked steak and a lot of love put into the cooking process.

A small step in the direction of the open door that is taste and spices can always be represented by a Mediterranean touch to your food. Lemon and garlic is among the best steak marinade recipes if only for the fact that it’s ridiculously easy to prepare and it continues to be effective in tickling your taste buds in all the right ways. Simply toss the steak into some herbs, garlic, and olive oil, then top it all with some thin slices of lemon.

There’s no denying that soy sauce is quite the flavorful when added to the side of an Asian dish, but it actually works just as well with steaks, especially those tossed on top of a grill. As a matter of fact, it’s very easy to give the meat a slight Asian twist just to get the best of what the soy sauce has to offer. All you need alongside the soy sauce is sesame oil and sugar.

Out of all the recipes so far, this one is the definite no-brainer of the best steak marinade types. All it takes is some old school balsamic vinaigrette to truly bring out the best types of flavors from a grilled piece of meat. It’s best sprinkled on top of steak consumed alongside a salad.

We’ve now treaded into the territory of proper marinade, so make sure that your storage is packed with spices for these fellas. In the case of this particular recipe, you need to take off the shelf your cumin, cinnamon, and paprika reserves, then mix them all together with garlic and lemon juice.

Mojo is essentially vinaigrette done in Cuba style, but to describe it just like this really doesn’t do this marinade justice. It’s a fantastic blend of cumin spices with citrusy accents, the latter being the cherry on top of the cake. Curtsy of all the sugars in the composition, you’ll get a mouthwatering caramelized crust when grilled.

Hey, nobody said that it’s mandatory for the best steak marinade recipes to also be the most expensive or luxurious ones. The adobo sauce annexed to cans of chipotle make excellent glazes for grilled steak, but only after stirred with olive oil, orange juice, and garlic.

Koreans have a classic dish called bulgogi, which is all about the accent put on marinade and how thoroughly it can change the flavor of meat. The base recipe involves dipping sliced beef in a blend of soy sauce, sesame oil, sugar, and garlic, but there is another take which simply throws red peppers into the mix for some extra hit on the tip of the tongue.

Since just a few red pepper flakes might not do it, those of you that are spice enthusiasts need to start writing down this recipe. Pay once again a visit to your storage room and grab a hold of paprika, cumin, dry mustard, brown sugar, and red pepper flakes.

Not only do they make for some of the best steak marinade types, papaya skins also really come in handy when you have to deal with tough meat that’s threatening to break your jaw apart when chewing. Simply dip the steak into a basic marinade, then dress it up in a layer of papaya skins in order to soften it up.