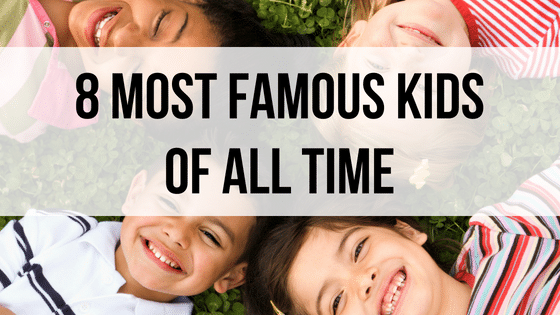 Who were the child actors of your time? Whether you’re a baby boomer who watched Ron Howard on the small screen or a millennial who grew up with Macauley Culkin and Kirsten Dunst, you are sure to learn something new about the famous kids in this article.

Most kids are playing in sandboxes, using building blocks or penciling in math problems before dinner.

But since the beginning of Hollywood’s history, some kids have held down full-time acting and entertaining jobs while using tutors to finish their schooling. And somehow fitting other aspects of childhood into the rare open slots on their schedules.

Of course, it’s safe to say the kids on this list also had bigger allowances than those around the sandbox.

Check out this list of famous kids who earned millions before they even graduated high school.

Shirley Temple was born in April 1928 and began her film career when she was just four years old.

By the time she was six, she became an international household name when she starred in Bright Eyes.

Other hits throughout the 1930s included “Curly Top,” “The Little Colonel,” “Heidi” and “The Little Princess.”

While many child stars have goals of taking on more adult roles as they age, Temple had other plans.

She retired from acting in the early 1960s and began working as a diplomat in 1969 when she represented the United States at the United Nations General Assembly.

Temple published an autobiography in 1988, won numerous awards, including the Screen Actors Guild Life Achievement Award, and acted as an ambassador to Czechoslovakia and Ghana.

She was married two times, had three children and was worth $30 million at the time of her death in February 2014.

You probably know Macauley Culkin as “Kevin,” the character in his most popular film, 1990’s “Home Alone.”

However, Culkin acted in a wide range of roles before and after the iconic holiday film.

He started with a small role in the comedy movie “Uncle Buck,” played the antagonist opposite Elijah Wood in “The Good Son” and even took on the role of Richie Rich in the 1994 movie of the same name.

That is a lot to accomplish at any age, let alone before you are even 15 years old.

In the mid-1990s, Culkin took a break from acting and married Rachel Miner.

After their divorce in 2002, he was linked to Mila Kunis for many years. Culkin re-entered the spotlight in 2003’s independent film “Party Monster” before going on to focus on his now-defunct rock band, The Pizza Underground.

These days, Culkin, who is looking much healthier than he did for most of his adult life, tries to distance himself from his days as a child actor.

He focuses on independent, experimental films when he decides to act at all. Fans can see him next alongside Seth Green in “Changeland.” Culkin is 37 years old and worth an estimated $15 million.

Dame Elizabeth Taylor was born in London, England, in 1932. Her family moved to Los Angeles in 1939. And she made her acting debut with a minor role in “There’s One Born Every Minute” when she was 10 years old.

Taylor won her breakthrough role in 1944’s” National Velvet.” And went on to become one of the most popular teen stars of her time.

Many child stars try to transition to adult roles without much success. However, Taylor never had that problem. She easily moved to adult roles in the early 1950s with roles in “Father of the Bride” and “A Place in the Sun”.

Although the height of her acting fame started to decline in the 1960s. She still remained in front of the cameras until the 1980s.

Taylor went on to become the first celebrity to launch a fragrance. As well as one of the first to take part in activism for HIV/AIDS.

In 1985, she co-founded the American Foundation for AIDS Research and in 1991, she founded the Elizabeth Taylor AIDS Foundation.

In her personal life, Taylor had one of the most expensive private jewelry collections ever recorded. And was married eight times. At the time of her death in 2011, she was worth nearly $1 billion.

By the time he was nine, Wood was a critically acclaimed child actor. In addition to playing opposite Macauley Culkin in 1993’s “The Good Son,” he had roles in “Radio Flyer” and “The Adventures of Huck Finn.” Before transitioning to teen roles in “Flipper,” “Deep Impact” and “The Faculty.”

He played Frodo Baggins in “The Lord of the Rings.” As well as had an important role in the 2004 cult classic “Eternal Sunshine of the Spotless Mind.”

Other films include “Sin City,” “Everything Is Illuminated” and “Maniac.” In addition to his acting roles, Wood is a DJ and producer. He works closely with The Art of Elysium. An art-based charity for hospitalized children and is worth an estimated $30 million.

5 and 6. Mary-Kate and Ashley Olsen

It’s practically impossible not to have heard of Mary-Kate and Ashley Olsen.

The fraternal twins got their start in television when they were just infants.

At the age of six, Mary-Kate and Ashley starred as themselves in a variety of direct-to-video movies.

Such as “To Grandmother’s House We Go” and the musical mystery videos known as “The Adventures of Mary-Kate and Ashley.”

After “Full House,” the twins guest-starred in several shows and attempted to find more sitcom success without much luck. In 2004, they starred in “New York Minute,” which was their last film together.

These days, the twins are known for being quite eccentric.

They are rarely seen in public and never smile. Their once affordable fashion lines now cater only to the wealthy.

They keep their lives very private, although it is known that Mary-Kate wed Olivier Sarkozy in 2015.

It is believed that Ashley is currently single after splitting from her 58-year-old boyfriend, Richard Sachs, in March 2017. The 31-year-old twins are worth an estimated $300 million.

Kirsten Dunst made her film debut at seven years old in Woody Allen’s film “Oedipus Wrecks.” Albeit her real success came when she was 12 years old.

In 1994, Dunst starred alongside Tom Cruise and Brad Pitt in “Interview with the Vampire.” And was nominated for a Golden Globe Award.

The same year, she appeared in “Little Women” and began work on “Jumanji.” Easily transitioning to teen roles that would make her a household name.

Teenagers of the 1990s and early 2000s loved Kirsten in popular movies. Such as “Bring It On,” “Get Over It” and “Crazy/Beautiful.”

From 2002 to 2007, Dunst starred as Mary Jane Watson in the Spider-Man trilogy. And in 2004, she starred alongside Elijah Wood in “Eternal Sunshine of the Spotless Mind.”

Dunst has been nominated for a variety of awards. And then won her first Screen Actors Guild Award for her work in 2017’s “Hidden Figures.”

She’s found much success in adult roles but is still most known for kissing Brad Pitt. She deemed the kiss. Which was her first, “disgusting.”

Today, Kirsten owns a home in Toluca Lake and is engaged to Jesse Piemons. She is worth an estimated $25 million.

Most people today know Ron Howard as a filmmaker. However, his career in Hollywood started long before he stepped behind a camera.

The now 64-year-old got his debut on none other than “The Andy Griffith Show.”

By playing Opie Taylor for eight years. After the show ended, Howard went on to play Richie Cunningham in “Happy Days.” Other early films included “American Graffiti” and the comedy “Grand Theft Auto.”

Ron has earned awards from the Directors Guild of America and the Academy, among others.

Some people may also recognize him as the narrator behind the Fox series “Arrested Development.”

Howard has been married to his wife, Cheryl, since 1975 and has four children.

His daughter, Bryce Dallas Howard, has become successful in her own right. Having acted in “The Village,” “Lady in the Water,” “The Twilight Saga: Eclipse.” And, more recently, “Jurassic World.” Ron is worth an estimated $140 million.

Of course, this is just a drop in the bucket when it comes to the amazing talent. That is child actors in Hollywood.

Now adults, people such as Miley Cyrus, Daniel Radcliffe and Dakota Fanning. Have all been in front of the camera since they were too small to see over counters. And have easily transitioned into roles meant for adult actors.

How will current child stars fare? Time will tell if Jacob Tremblay, Finn Wolfhard, Millie Bobby Brown and other popular child stars will transition into teenage and adult roles. Or decide to take another life path altogether.