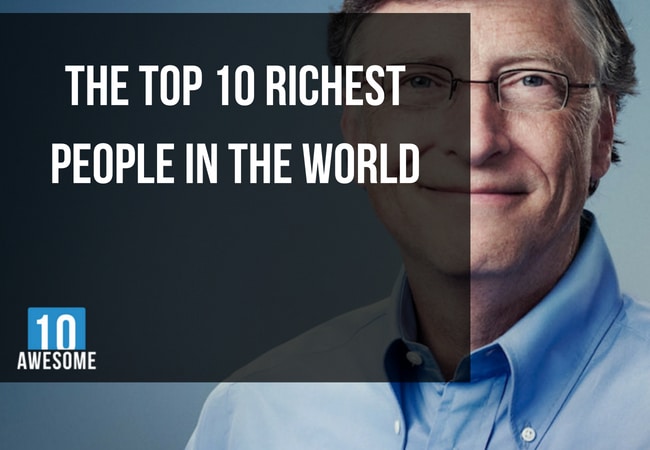 It’s said that 1 percent of the world’s population controls more than half of the world’s wealth, but even among the elites, there are still the best of the best. Let’s take a look at the 10 richest people in the world, according to Forbes — and it might not be who you think.

(No, Donald Trump didn’t even come close. Maybe if he wasn’t spending his money gold-plating everything with his name…)

Amazon is everywhere, so it’s not surprising that Amazon’s founder and CEO, Jeff Bezos, tops this list. Amazon has a major role as the world’s leading online retailer and self-publishing platform, but it doesn’t stop there; from custom home deliveries to groceries, logistics, and even healthcare, the company is expanding in so many directions it’s a miracle Bezos can keep up with how much money he’s making or spending. Bezos himself came from humble roots; his first job was as a McDonald’s fry cook.

Fun Fact: Jeff Bezos appeared in a cameo role as an alien in the 2016 film Star Trek Beyond.

For the longest time Gates, as the founder of Microsoft, topped this list, before he was ousted by Bezos. From a childhood writing his first computer programs on a General Electric computer, Gates built himself into a pioneer in the technology industry with a focus on innovation, usability, and everyday practicality for productivity software and machines.

While he still uses his smarts — and his money — to investigate the next generation of technology and software intelligence, he’s also known as a major philanthropist behind many large-scale donations and foundations. While he may be the second richest person in the world, he also strives to give back to those in need.

Fun Fact: Bill Gates was arrested in New Mexico as a young man for running a red light.

If anyone knows money, it’s Warren Buffet of Berkshire Hathaway. Imagine how much money $175 was worth in the 1940s. Now imagine making that kind of money as a young teenager who bought his first stock for $38 at age 11, and you’re putting yourself in the shoes of a young Warren Buffet. The investment ace wasn’t just an early bloomer; he shot out of his traces from the very start with preteen lunches with stock exchange experts and a net worth that surpassed the average adult before he was even old enough to drive.

From talented tyke to billionaire, Buffet still keeps it humble with a frugal approach. He still lives in the same 5-bedroom house he purchased for $31,500 in 1956.

Fun Fact: Buffet used to be terrified of public speaking, until a Dale Carnegie course that not only helped him overcome his fear but helped him propose to his wife.

“LVMH” may not be something you think of when you think of luxury, until you realize it stands for Louis Vitton Moet Hennessy — and the man who runs it is none other than the fourth richest in the world.

He actually began in real estate, taking over the family business to drive successful growth before leaving France for a life of condominium development in the U.S. during the early '80s rise of French Socialism. It wasn’t until 1983 that he would return to France and begin his first ventures that would lead him into the world of fashion and luxury goods. He’s now the man behind the aggressive market dominance of luxury brands such as Louis Vuitton, Bulgari, Christine Dior, Dom Perignon, Sephora, and Fendi.

Zuckerberg may be facing some harsh times lately. However, that doesn’t change the fact that his name is one everyone instantly recognizes as the power behind Facebook.

He rose to fame from obscurity that a film, The Social Network, was even made to catalogue and dramatize his journey. Zuckerberg also turned an idea into a global network that has facilitated a number of surprising tech ventures — from wi-fi balloons to artificial intelligence. Zuckerberg has been studying how technology impacts our lives since he was very young, including creating Synapse as a teenager to analyze music habits before going on to launch Facebook.

Fun Fact: Mark Zuckerberg is red-green colorblind. He struggles with various colors, but blue is the color that stands out to him most. That’s why it’s so key in Facebook’s brand coloring.

Amancio Ortega Gaona is the second international name on this list, and he came to prominence in Spain as the power behind Inditex fashion group. (Noticing a theme? Apparently fashion is a lucrative industry.) Even if he’s not the wealthiest man in the world, Ortega is rated as the wealthiest retailer in the world. However, that doesn’t stop him from being humble.

Not only does he share tables on the factory floor with his workers, but he donated €320 million for cancer research, diagnosis, and treatment. He first started his business with a 2,000 peso bank loan and built it into an empire, but nonetheless prefers the simple life and stays out of the spotlight.

Telecommunications is a hot market for profit if you know how to work it. Carlos Slim Helu knew that when he started working to purchase and privatize a government-owned telecommunications company in 1990. Since then smart diversification decisions led him to gain the status of Richest Man in the World in 2010, and he is the first in history to ever gain that title from a developing nation. Helu is of Lebanese descent but grew up in Mexico. You may not have heard of him because he prefers to fly under the radar and live frugally. However, he’s still a man of influence and has been practicing what he preaches since his first business ventures at the age of 12.

Fun Fact: Helu is highly technophobic. While he enjoys discussing technology, he prefers pencil and paper to a computer.

The Koch brothers have become less people and more symbols in the eyes of the public. What they symbolize is great controlling wealth and power. Koch Industries has come under fire for political involvement and potentially less-than-ethical practices, and people have constantly spoken out about concerns regarding the brothers’ influence in the conservative movement. Koch Industries is a petroleum refining and manufacturing company, though the brothers first gained their leg up into financial growth through engineering contracts that can be traced back to the Soviet Union.

Fun Fact: We can’t think of anything particularly fun to say about Charles Koch. Or his extremely obvious veneers.

The other half of the Koch Industries empire, David Koch might as well be the other side of a coin with two heads. Both Koch brothers are considered heavily influential in donations that influence oil and gas lobbying to their financial benefit. The brothers’ $60 billion net worth is considered combined rather than separately, and so they’ve earned their places as number eight and number nine as a joint entity rather than solely.

Fun Fact: Although David is the younger brother, we are fairly certain — but cannot confirm — that he did not actually bud from his older brother Charles and slowly form into a sentient being.

For a palate cleanser, let’s take a look at software industry giant Larry Ellison. The man behind Oracle wasn’t exposed to computers until college. However, that didn’t stop him from taking leaps forward in technology development and software advancement. He then created some of the most essential tools on the market today. Like many of the entrepreneurs on this list, Ellison came from humble roots and built his business on a minimal investment. He had an idea, business smarts, and good timing in rapidly expanding markets. Even with Oracle once nearly going bankrupt, Ellison has managed to use his ingenuity and innovation to promote growth and rescue the company from the brink of ruin.

Fun Fact: Ellison is a thrill-seeker who’s not afraid to risk injury for an adrenaline rush. He has been hospitalized more than once for injuries related to extreme sports.

We may never know what it’s like being so wealthy you don’t have to stop to check your bank account before trying to buy a latte. But we can look in on the lives of the rich from outside, admire them for their ingenuity and charity, or despise them for their ill-gotten gains. It’s likely we can all agree, though, that the rich live in a wholly different world. They could probably buy a few dozen more worlds just for fun if the mood struck them.