There are a lot of horror movies, some good, some downright disgusting, but all of them extremely scary. It seems that some of the best horror movies emerged in the last 10 years alone, so a top 50 best horror movies would be better suited. However, we have compiled a list of the best 10 horror movies, listed in a random order, which are a definite must see! Ghosts, aliens, vampires, demons, gore, torture, animals, monsters and serial killers are only some of the prevalent elements in these sinister films. Prepare to have your world shattered, as we describe to you the most macabre fantasy, supernatural and thriller horror movies since 2000. 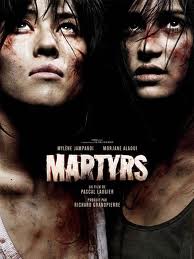 This movie will undoubtedly keep you at the edge of your seat. It is one of the most complex movies you will ever see, and the best horror film to be screened by french producers. The story behind it is disturbing and powerful, but no matter how scary it becomes, you will be enthralled by the unsettling tale. The only thing we will say about the plot is that the story is about a ten year old girl, Lucia, which was found wandering on the side of the road, the rest is for you to find out.

Stephen King has won his title as master of horror stories, after his brilliant books have managed to scare millions of readers all over the world. Carrie, The Mist, Cujo, and Pet Sematary are only some of the books which were made into movies. The most terrifying, however, is The Shinning. Jack Nicholson plays his part brilliantly, and the scary occurrences in the Overlook Hotel are sure to give you nightmares. As you might have guessed, the main character goes nuts due to phantoms and strange events, and there is only one thing that can save him…

3.  THE EXORCISM OF EMILY ROSE

Most of you might have already heard of this bizarre tale. As the name suggests, the movie depicts a true story of religion, faith, and exorcism. Narrated in chilling retrospective sequences, the story follows the unlucky events which lead to the death of Emily Rose. The movie is disturbing, and it will surely leave you with many questions.

A personal favorite of mine, is the Grudge. Although the movie has been slandered and mocked in numerous occasions, the story behind it is quite interesting. It all starts with a Japanese curse. Apparently, anyone who comes in contact with this curse will die. Pretty scary? The supernatural horror film is based on the Japanese belief that when someone dies in the grip of powerful rage or extreme sorrow he/she will never find peace. As a result all who encounter this evil will die, and feed the ever growing curse.

Of all the low budget horror movies, Saw has made itself noticed due to the ingenious solution to ending the tense situation. It all starts when Adam and Lawrence Gordon wake up tied to each other in a filthy toilet. They realize that they have fallen victims to Jigsaw, a man who wants to teach people to appreciate life, by forcing them escape from desperate situations. This is not just a horror movie, but one with deep psychological meanings which will make you question human nature.

In Sweeney Todd we have the incredibly talented (.. and sexy ) Johnny Depp, plays the most gruesome role of his career. The movie is an adaptation of the musical Sweeney Todd written by Stephen Sondheim. The movie is absolutely grotesque and extremely scary, and it is actually more of a crime-thriller than a horror story. Nonetheless, it is brilliant, and it is the kind of movie which will make you go to sleep with the lights on.

The plot of the movie is about a guy, Jim, who wakes up from his coma 28 days later, in a hospital in London. He soon realizes that all the people from the town have disappeared. After wandering on the streets for a few hours he meets a group of survivors in a church. Soon after he is attacked by some strange creatures. He soon finds out that a virus has taken over mankind and transformed them in raging animals.

Contrary to most horror movies, some of which play with the resistance of the spectator by exhibiting physical violence to the degree of unbearable, the director of Drag me to hell chooses an unconventional way of depicting events. He alternates moments of intense fear with moments of relaxation, which will keep you in a state of shock during the entire film. After a hallucinating generic which announces the atmosphere of the movie, Sam Raimi distilled the plot by introducing the characters. Afterward, the story becomes more and more dark, until you are left paralyzed with fear.

The Unborn is a supernatural thriller whose heroin is a young 19-year-old girl, Casey Beldon. She has to fight against a malefic spirit which is taking over her body and mind. Tortured by nightmares and ghosts, she finally decides to ask for the help of Doctor Sendak, a specialist in the occult arts.

One year after a tragic accident, six friends meet up in the Appalachian mountains for their annual ski trip. This year they decide to visit a cave hidden in the mountains. Somewhere deep inside the mountain the group becomes trapped. But there is something else there… lurking in the shadows…

This is the story about a fight against an unimaginable evil which strikes restlessly, again… and again…

Done with your marathon but craving some extra thrills? Here are a few more options:

Get Out – Released din 2017, this disturbing movie centers on an interracial couple who goes for a weekend getaway at the girl’s parents. But as the weekend progresses, the guy will discover a dark truth he never could have imagined before.

Hereditary – Sometimes you inherit stuff from your relatives you would have never asked for. As far as this movie is concerned, that premise is taken to extremes. When the matriarch of a family passes away, her daughter and grandchildren learn some increasingly terrifying secrets about their ancestry. Turns out, they have inherited quite a sinister fate.

A Quiet Place – This intriguing movie takes place in a world populated with dangerous creatures. If they can hear you, they hunt you. As a result, a family has to live in complete silence in order to survive. Don’t be fooled – in this case, the movie is way more ghastly than the premise suggests.