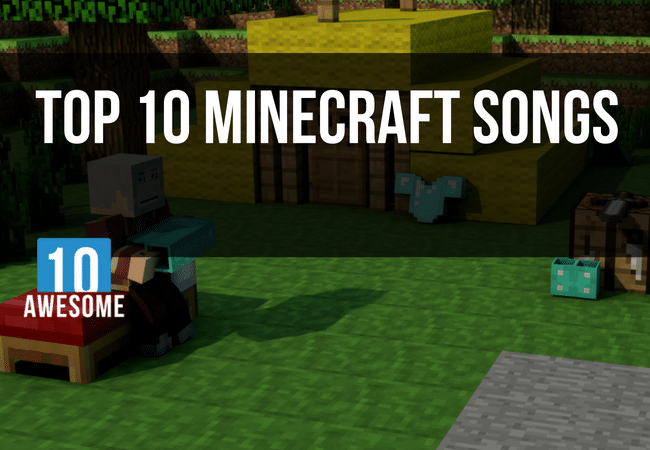 Minecraft is a popular game for a variety of reasons. Members of the Minecraft community have created original songs and parodies that pay tribute to the many ins and outs of the game. While some songs are brilliant, others are hard to love. The top 10 Minecraft songs excel lyrically, musically and thematically.

As far as games go, Minecraft is hard to beat. Not only does the game stoke creative fires of anyone who plays it, it has conflict and resolution elements that make it perfect for teaching life skills. Further, Minecraft has a simplicity that is nothing short of genius. Even better, the mines, landscapes and characters are a feast for the eyes. The game does not only stimulate the player’s visual senses, though. On the contrary, the Minecraft soundtrack is both catchy and enjoyable.

Perhaps the greatest aspect of Minecraft music is the creativity members of the community exhibit. Drawing on classic musical selection and modern tunes, users make innovative pieces to showcase their passion for all things Minecraft.

What are the best Minecraft songs? Among active gamers, the musical debate rages. What constitutes a great musical element likely depends on the style of music you enjoy. Still, the greatest Minecraft tunes share some commonalities that make them stand out from other ditties in the realm.

Read on for our list of the top 10 Minecraft songs.

How We Chose Our Ratings

Every time we put together a best-of list, we take our responsibilities seriously. As such, we emphasize accuracy and reliability over all else. To formulate our rankings, we listened to dozens of Minecraft songs.

We also read social media posts, online reviews and professional critiques of the many tunes that Minecraft enthusiasts have created. While you may disagree with our song placement, we think you will recognize that all the songs we list are the best of the best the Minecraft community has to offer.

The bad guys are what make Minecraft fun. After all, if you weren’t avoiding villains, you would spend all your time mining. Who wants to do that? TheAtlanticCraft created the 10th best Minecraft song on our list. Set to the tune and music of Katy Perry’s “California Gurls,” “Supernatural Mobs” is both catchy and lyrically meaningful. The first verse of the song sets the Minecraft tone perfectly:

I spawned a world

Where the mobs are really meaner

There must be something in the wall here

The true brilliance of the piece comes in the chorus, where the supernatural mobs assert their dominance with the next lyrics:

We got you on lock

Now put your bones up

Not only is “Supernatural Mobs” musically perfect, it features exceptional vocals. The music video is cool, too. Whether you pull for the villains or are just a fan of modern pop music, you are sure to find “Supernatural Mobs” a standout in the genre of Minecraft music.

Up one notch is a song that celebrates the Minecraft landscape. “Cube Land” by Laura Shigihara is unlike any other tune paying homage to the popular game. This original tune immediately pulls at the heartstrings of anyone who is passionate about Minecraft. The lyrics are full of emotional strife and angst:

I’m in a cube land

I dig with cold hands

I use these tools to try and

Climb out of this mess I made

Even though “Cube Land” is slower than most other songs on our list, it is memorable and easy to sing. The song hit the Minecraft community more than five years ago. Nonetheless, its meaningful message resonates with users even today. Virtually every commentator recalls feeling nostalgic and sentimental at hearing the Shigihara tune.

There are thousands of parody songs with Minecraft messages. Some are instant classics and others have a mediocre sound. One of the most impressive is a parody of Maroon 5’s smash hit, “Payphone,” by Mineworks Animations. Every musical list deserves a love-gone-wrong song, and “Mineshaft” gets the job done:

Throughout the song, you wonder whether the singer and his love will make it. You must listen to the end to get your answer.

Taio Cruz’s “Dynamite” is one of the biggest ear worms of the past decade. When combined with Minecraft themes, it isn’t hard to see why “TNT” by CaptainSparklez and TryHardNinja makes our list. In the song’s video, the protagonist simply can’t lose as he goes about his mining. Beats bump a lyrically sound tune that reminds you of sticking to the task at hand:

And then I’ll head back home

Where I’ll smile with glee

Now that I can make tons of TNT

Compared to other Minecraft tunes, “TNT” is easy to learn. It also leaves you with the perfect mic drop:

A better CaptainSparklez Minecraft song is “Revenge,” set to Usher’s “DJ Got Us Fallin’ in Love.” “Revenge” is the most popular Minecraft song on our list, having racked up more than 130 million views on YouTube. The tune is the ultimate rallying song, inviting the player to do the following:

The creepers tryna steal all our stuff again

‘Cause baby tonight, grab your pick, shovel and bolt again

And run, run until its done, done

Until the sun comes up in the mornin’

The creepers tryna steal all our stuff again

It is impossible to get through five seconds of “Revenge” without tapping your toe. Whether you are looking to dominate Minecraft or cruise through town, “Revenge” is the perfect soundtrack.

There seems to be an inordinate number of Minecraft parody songs based on Coldplay hits. While another one ranks higher in our list, number five is “New World,” a take on Coldplay’s “Paradise.” With its bizarre video and funny lyrics, “New World” by Sky Does Minecraft is the perfect mining tune. Even though the repetition can be gritting, the following lyrics are incredibly memorable:

When you play mine, mine, Minecraft

When you play mine, mine, Minecraft

Perhaps the crowd favorite Minecraft tune is “Like an Enderman” by ThnxCya. As with “Supernatural Mobs,” this entry exalts the enemy. The song is not dark or ugly, though, as it parodies Gangnam style, Psy’s breakout hit from a few years ago:

You saw me there

​Just one glimpse then I’m gone

But not for long

Coz I bet you’re scared

This town ain’t built for two

​​Not only are the lyrics in “Like an Enderman” well-written, the vocals are good. Even better, the song manages to deliver a sense of dread without being dreadful. For our purposes, that is good enough for the fourth best Minecraft song.

CaptainSparklez makes our list again with the number three song. “Take Back the Night” is not a parody, making it one of the few original tunes to make our survey. The song is a hero’s epic, describing the voyage of a prince in a beautiful melody and video.

The Bajan Canadian parodies Borgore’s “Decisions” for our runner-up tune. This song delivers a driving, mortal call for battle in repetitive lyrics:

Whether you are gaming or trying to accomplish a major life goal, the “Hunger Games Song” is the motivation you need to succeed.

The best Minecraft song is a parody. Still, its clever construction, ideal vocals and memorable melody land TryHardNinja’s “Fallen Kingdom” at the top of our list. Performed to the tune of “Viva La Vida” by Coldplay, “Fallen Kingdom” has everything you want in a tribute tune. It really stands out lyrically, however:

I used to rule the world

Chunks would load when I gave the word

Now every night I go stow away

Hide from the mobs I used to slay

They once were terrified

Every time I looked into their eyes

Villagers would cheer my way

For a hero I was, that’s what they’d say

Outlining the old-as-time struggle of building and rebuilding an existence, the CaptainSparklez-produced tune is something to which everyone can relate.

The best way to appreciate the 10 best Minecraft songs is on YouTube. You may also choose to download songs on Spotify or another streaming service.

Either way, adding some of the best Minecraft songs to your everyday playlist gives you access to memorable music that is easy to enjoy. Whether you have been playing Minecraft for years or simply appreciate these parodies and original songs, you can’t lose when you enjoy the game in a new, musical way.​

You now have the top 10 Minecraft songs. Which one is your favorite?