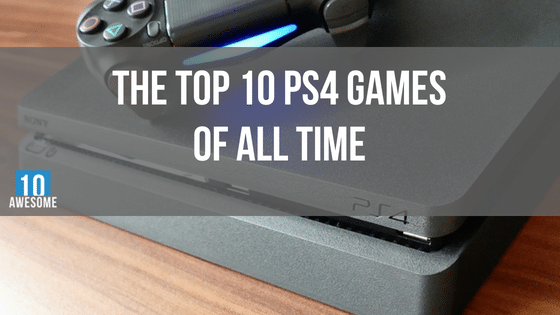 Everyone’s got their opinion on what makes a great game, and we’re no different. Take a look at our picks for the top 10 ps4 games of all time ever released on the PlayStation 4 console. Want to talk games and what makes them great?

Check out our list and weigh in with your own favorite 10 games.

We know God of War and Kratos’s precocious little sprout are sweeping 2018. The game is well on its way to becoming a legend far beyond its time, but we’d like to pry our eyes away from Kratos’s bristling beard and flexing, fatherly pecs to talk about our top 10 PS4 games of all time since the console’s launch… Other than God of War.

We’ve got opinions — and we’re willing to fight you on them. Five rounds in the ring, Tekken style. Do you even Mishima, bro?

Quick Navigation
The Top 10 PS4 Games Comparison Table
The Top 10 PS4 Games of All Time
INSIDE
Overwatch
The Last of Us – Remastered PS4 Edition
Grand Theft Auto 5
Metal Gear Solid V: The Phantom Pai
Journey
Persona 5
Titanfall 2
Rise of the Tomb Raider
The Witcher 3: Blood and Wine
So That’s Our 10. What Are Yours?

Putting INSIDE top on this list probably makes us pretentious.

We don’t care. Playdead has mastered the concept of gorgeous atmospherics that creates a haunting setting for a young boy’s journey.

The gameplay experience is superbly immersive, leaving your heart in your throat the entire time. It doesn’t even feel like a puzzle platformer, yet it continuously challenges you to exercise your mental muscles to work your way through an increasingly difficult and strange environment that’s as fascinating as the gameplay itself.

Don’t let the fact that you play from the POV of a young child discourage you. This is every inch a game that will pull you into its raw emotions, and there’s nothing childish or simplistic about it.

If Overwatch isn’t in your top 5 — and not just for a few deleted poses — you’re doing gaming wrong. Overwatch revolutionized how we think about MOBA, online gameplay, and team shooters. Blizzard took the MOBA concept and turned it on its head, while giving us characters with stories we could invest in so we actually cared about who we were skinriding to victory.

Overwatch proves that sometimes you don’t have to be the most complex in the game.

You just have to know how to do simple really well, and leverage what you’re best at to build a blockbuster game. With continued releases of new content, Blizzard has ensured that the story will continue to develop in between rousing matches — and that players will always have a reason to come back for more and discover something new about their favorite game

The Last of Us – Remastered PS4 Edition

Do you like crying? We don’t like crying. Yet somehow we choked and sniffled our way through the emotional heartwrecker that is The Last of Us, remastered for the PS4 with better graphics, gameplay, and multiple other additions that make it worthy of the PS4’s graphical capabilities.

While you’ll get some good action and suspense in The Last of Us, it’s definitely a story-based game that will pull you in and get you deeply invested before making a determined and largely successful attempt to destroy your soul — and you’ll enjoy every moment of it in high-intensity, breathless 1080p.

Look, you know Grand Theft Auto in some incarnation had to make this list. GTA 5 gives us Los Santos as a completely expansive experience it’s easy to get lost in, more so than any other GTA world.

Playing GTA 5 is pure smash-and-grab havoc, and that’s what makes it fun. The game has also come leaps and bounds to improve the overall user experience in every incarnation, and GTA 5 shows exactly what Rockstar has been doing with each iteration to make gameplay as seamless and enjoyable as possible — while still being the wildest thing you’ve ever seen on your PS4.

What makes GTA 5 really fun is that no two gameplay experiences are exactly the same. You can make the game completely yours just by the choices you make and how you choose to explore. It’s the height of non-linear gameplay and has amazing replay value.

Look. We all saw that scene of Quiet Snake playing in the rain. Not one of us buys the reason why she needs to wear that outfit.

That doesn’t mean we can’t enjoy the game in all its graphical glory, and once more return to the story of Big Boss as we’ve never seen him before. The gameplay borders on cinematic in its experience, until you’re never quite sure if you’re progressing the game or the game is progressing you. With a great combination of action, storytelling, and character development, Metal Gear Solid V is a worthy addition to the MSG franchise that’s made all of us gamers for decades.

And if we rewatched the shower scene, well…

If you enjoy sweeping vistas and stunning aesthetics that exist solely to consume them in quiet wonder, Journey is your game.

Playing Journey is as much about the visual and auditory experience of the environment and music as it is about discovering the world. The gameplay is simple enough that it’s easy to lose yourself, and it’s yet another example that complicated doesn’t necessarily mean better.

Journey joins its predecessors from thatgamecompany (TGC) in breaking the mold for what gaming means, when sometimes gaming is about the simple pleasure of discovering an immersive world with a rich mythology.

Even better is the ability to join with strangers in an online world where it’s easy to forget those pixels are other people, immersed in the same sense of wonder as you

Persona 5 can be a little hard to follow if you haven’t spent much time with other games and media in the franchise, but the concept remains stable enough to hold true throughout story after story.

As you occupy the persona (no pun intended) of a high school student whose alter ego is caught up in the mysterious machinations of the game world, you find yourself drawn into the subtleties and sense of fraught tension that so often marks a good dark JRPG. Persona 5 captures the feeling of the franchise while delivering a new adventure that offers new insights into the world and entertaining gameplay to experiment with.

The first installment in the Titanfall franchise shook us to our core, and the second installment returned to rock us down to our very bones. With both single-player and multi-player modes, Titanfall 2 returns us to a fast-paced world of exactly the kind of dark, gritty, adrenaline-laced action you want when you’re summoning massive mechas down from the sky.

It’s not quite as stunning as the original if only because there’s little shock value left, but it has the benefit of being a shooter that doesn’t quite feel like a shooter, while the atmosphere and graphics tell us we’re getting a character-driven, world-driven story that doesn’t disappoint.

Rise of the Tomb Raider

Looking past the shiny bonus content you get with the PS4 20-year edition. Rise of the Tomb Raider is just a smart, savvy game that really explores the potential of what the Tomb Raider franchise can do.

Every pixel is wholeheartedly invested in showing us how far Lara Croft has come from when she was five neon turquoise polygons stacked on top of a cardboard box with Michael Jackson’s pixelated head attached.

Rise of the Tomb Raider shows us who she is as she comes into herself as the badass we know and love, while giving her humanity, depth — and the ability to kick some butt with the push of a few buttons. Rise of the Tomb Raider makes for enjoyable gameplay and the thrill of discovery, while stretching the limits of what PS4 graphics can do with realistic models and effects.

The Witcher 3: Blood and Wine

We’re well aware you may want to disown or even crucify us for putting The Witcher 3: Blood and Wine last on our list.

Look, it’s still in our top 10, it’s just not top of our top 10. There’s a certain camp to The Witcher series that’s charming at first with how seriously it takes itself but can begin to wear over time, and that wear showed a bit despite enjoyable gameplay and a completely new spin on the world of The Witcher with the introduction of Toussaint.

It still delivers a knock-down story that makes sure you’ll remember The Witcher 3 as a slamdunk closer in Geralt’s tale.  You also have nearly three figures’ worth of main story and side quests. With plenty to keep you entertained for hours.  You’ll probably enjoy the wink-nods to real life more than we did. The joy of The Witcher 3 was in its gameplay and central storytelling, not in its humor.

Maybe we’re getting too old for satire.

We’re still willing to fight you over our choices.

All right, we might not fight you. But we’ll happily debate merits of one game over another. Drop a line, let us know what you think, and give us your thoughts on your favorite games to ever grace the PS4 console.

(Just don’t say Cuphead. We know that’s never coming to PS4. They teased us, they hinted, they let us down… Just like you’d expect from the sadists who created Cuphead in the first place.)