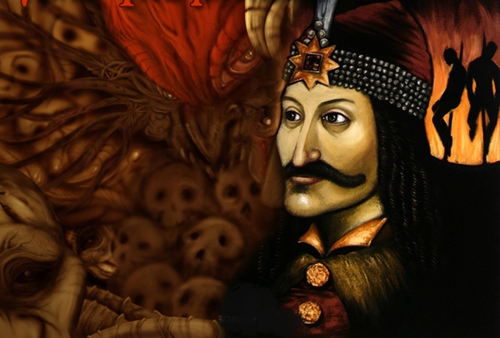 Also known as Vlad Tepes, Vlad III or Vlad Dracula, he was the son of Vlad II Dracul and a member of the Order of the Dragon. Regarded as sadistic by foreigners, he was, in fact, a savior for the Romanians and Bulgarians during the Ottoman conquest of the Balkans. He was only nicknamed “the Impaler” after his death, owning it to his unique reputation of impaling his enemies and engaging in acts of extreme cruelty. These ten facts about Vlad the Impaler will help you understand how he became so well known and what were his reasons for torturing his enemies.

Born in 1431 in Transylvania, Vlad the Impaler lived for 45 years. During this time he was Prince of Wallachia three times, under the title of Voivode of Wallachia. He always was very brave in battle and never shied away from confronting his enemy head on. He was killed in battle by decapitation and the Turks kept his head as a trophy, even displaying it on a stake to prove he was really dead.

Vlad Tepes remained known for his method of impaling his enemies as a means of condemning injustice and as a display of power. He used to stick the stoke through their torsos and erected the stokes in the ground. This did not kill the victims at once, and at times they were left in agony for days on end. Vlad III applied this punishment to thousands of prisoners at once, impaling them either vertically or horizontally.

3. It was a family business

Born in Sighisoara, Vlad the Impaler was the son of Vlad II Dracul also known as Vlad the Dragon, or Vlad the Devil. This is how Vlad Tepes got to be dubbed of “son of the dragon” and afterwards “son of the devil”. Vlad learned combat skills, science and geography early on with Greek scholars while he lived in Targoviste with his brother, Radu III the Handsome. He received a careful education and got to learn Old Church Slavonic, German and Latin.

Stoker published “Dracula” in 1897 and used Vlad’s name for the title. It is said Stoker got the idea for his book from his Hungarian friend who was a history professor. The book is about Count Dracula, the vampire who plans to move to England in search of new blood. This work of fiction contains some historical references. Stoker set his character in Transylvania, which was North from Wallachia, where Vlad the Impaler only fleetingly set foot.

Not only did Vlad Tepes have academic knowledge and good close combat skills, he could also plan attacks and lead armies. After his father’s death, he regained Wallachia only to be cast out by the Hungarians and exiled in Moldavia. But when the Moldavian leader was killed, Vlad turned to the Hungarians for help and became an adviser for John Hunyadi. Vlad managed to claim Wallachia once again after he killed Vladislav II in personal combat.

During his second reign as a Prince, Vlad took an interest in the agricultural economy and the military forces flourished under his command. He was merciless with thieves and the boyars he suspected were making alliances with Hungary and he rid the cities of beggars.

At the same time, Vlad Dracul limited foreign trade in an attempt to help local merchants and trade. He focused on building new villages and encouraged local merchants to strengthen their businesses. He is remembered as an advocate for justice and integrity.

8. He was betrayed and paid a heavy price

In his attempt to defeat the Ottomans, Vlad the Impaler was betrayed by Corvinus who blamed him for making victory impossible. As a consequence, Vlad spent twelve years in prison in Hungary. Meanwhile, his brother, Radu III the Handsome, was the Ottoman Empire’s puppet, ruling in Wallachia.

While Germanic documents tell us about a tyrant, monstrous, cruel Vlad, Romanians still see him as a good leader who fought for justice in an attempt to remove corrupt boyars from high seats. Vlad Tepes was married twice. His first wife gave birth to his heir, Mihnea cel Rau (Mihnea the Evil) and his second wife gave him two more boys.

The association between Vlad Tepes and vampirism was made by Bram Stoker. Since then stories about vampire mythology have been flourishing. But in reality, Vlad the Impaler did not fly away from his castle to suck the blood of his enemies. He did not keep fresh bodies at hand to have something to snack on. He just impaled his enemies.