Do you remember our post with Salvador Dali prints? It’s time to make a list with prints from one of the greatest, if not the greatest Dutch post-impressionist painter. Did you guess who I’m talking about yet? Yes, it’s Vincent Willem van Gogh – an outstanding painter who’s style combined raw beauty, bold colors and emotional depth to create some of the most famous and creative paintings of all times, although during his lifetime only a handful of people saw the genius of his work. Vincent was born on 30 March 1853 and died at the age of 37 from a gunshot wound, supposedly self-inflicted. His work reached the farthest corners of time up to the 20th century; in only a decade he created over 2.100 artworks – 860 oil paintings, and more than 1.300 watercolors, prints and sketches. Van Gogh favorite themes were self-portraits, still life, landscapes, and portraits. The Dutch painter traveled to several cities in which he got a taste for the inner works of this superb art, including The Hague, London and Paris. While some art critics emphasize Van Gogh illness as the source of his genius works, the best understanding of this man was drawn from his collection of letters addressed to his younger brother – an art dealer – Theo Van Gogh. If you like his paintings as much as I and dozen millions of people do, here’s a list of Van Gogh prints. 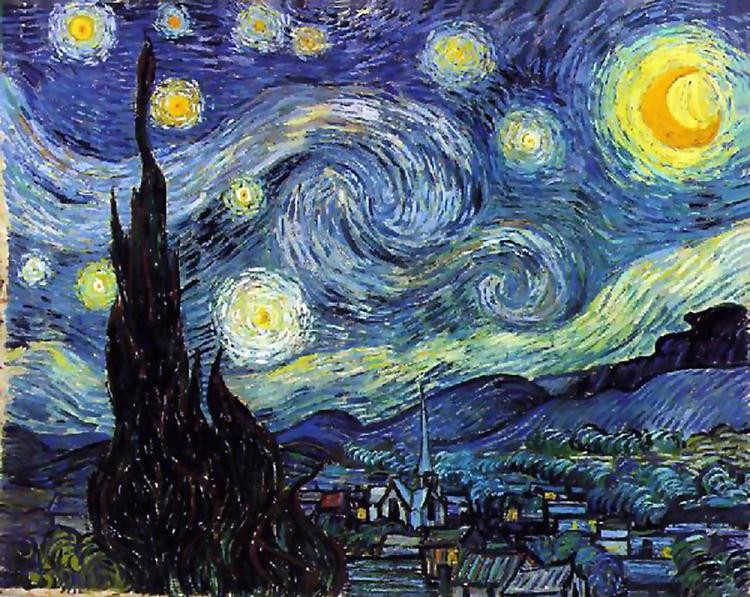 De sterrennacht is the Dutch name of the painting which depicts his outside view while he was at the sanitarium at Saint-Rémy-de-Provence (southern France) during the night. Until 1941 the painting was in the permanent collection of New York’s Museum of Modern Art. The print is available in sizes from 24” by 18” to a maximum of 42” by 33”. 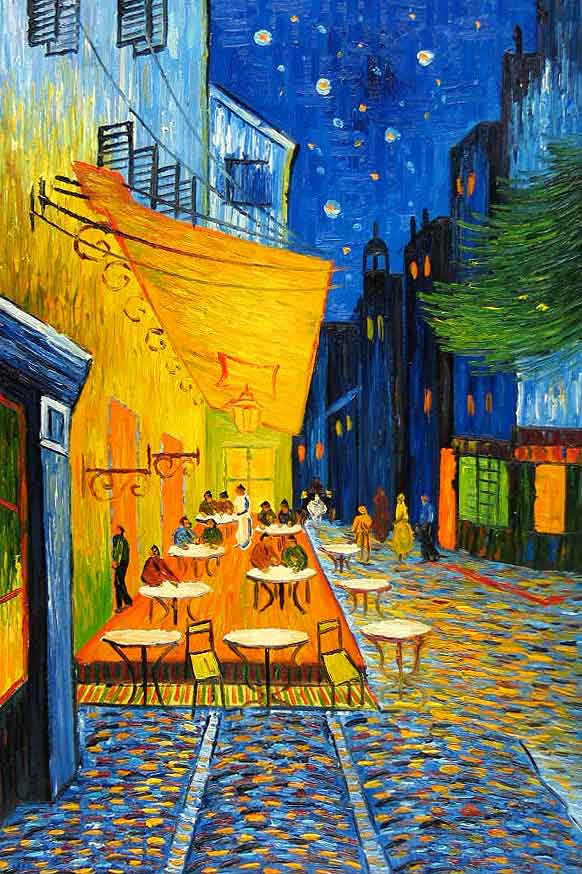 Also known as The Cafe Terrace on the Place du Forum, this one was made by Vincent sometime around mid-September 1888 in Arles – France. Although the painting was not signed, it has been mentioned by him in his letters. It is found in the Netherlands, at the the Kröller-Müller Museum. The print’s quality is outstanding due to the process used to reproduce the original – high quality paper and the giclée process – where millions of ink droplets are sprayed on the paper’s surface. 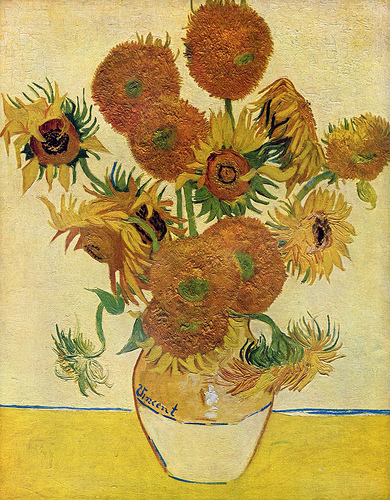 Sunflowers by Van Gogh is a recurrent motif in his work, being the subject of two series of still life paintings. The first series were produced in the city of love and lights (Paris) in 1887. The second set was executed after just one year in Arles and depicted bouquets of sunflowers in a vase. Paul Gauguin purchased two of Van Gogh’s first series. The print is produced on  Forest Stewardship Council certified paper colored with soy-based inks.

Painted in July 1890 Wheatfield with Crows is allegedly Van Gogh’s last painting. The feeling of isolation is heightened by the central path which seems to lead nowhere and everywhere at the same time. The reproduction is coated in a silk-like finish to protect the inks, while giving the print an elegant look.

6. View of Arles with Irises 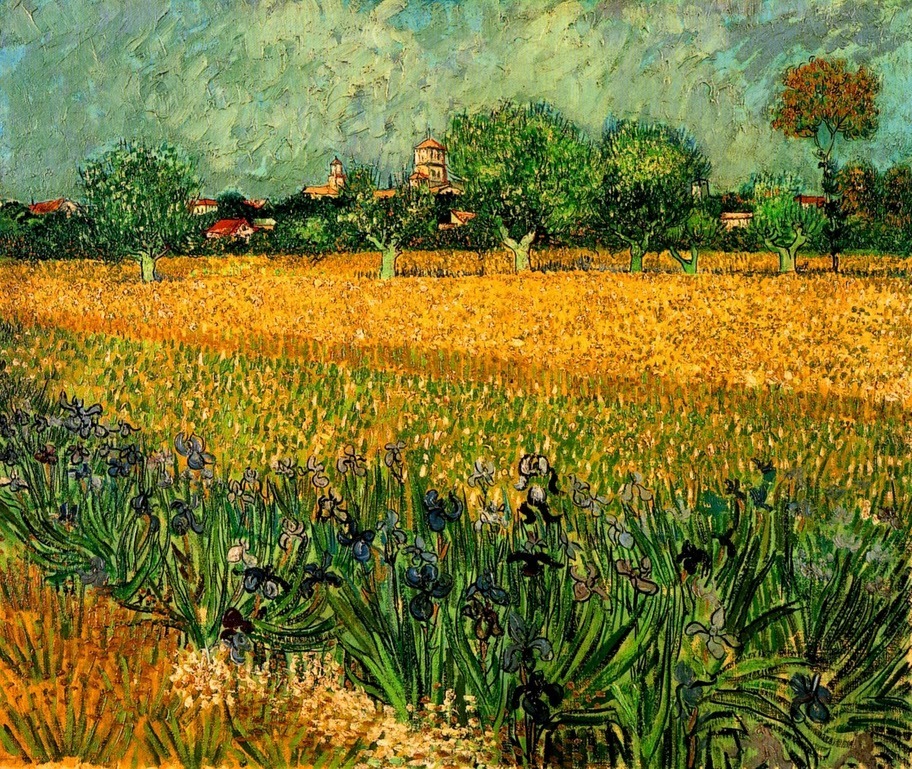 After two weeks of continuous drawing, Van Gogh started working on this oil paint depicting the beautiful city of Arles and its field of irises. The beautiful reproduction faithfully copies the superb colors of the original painting, making it a versatile product, and taking the sixth place in our list of Van Gogh prints.

5. Garden of the Hospital in Arles 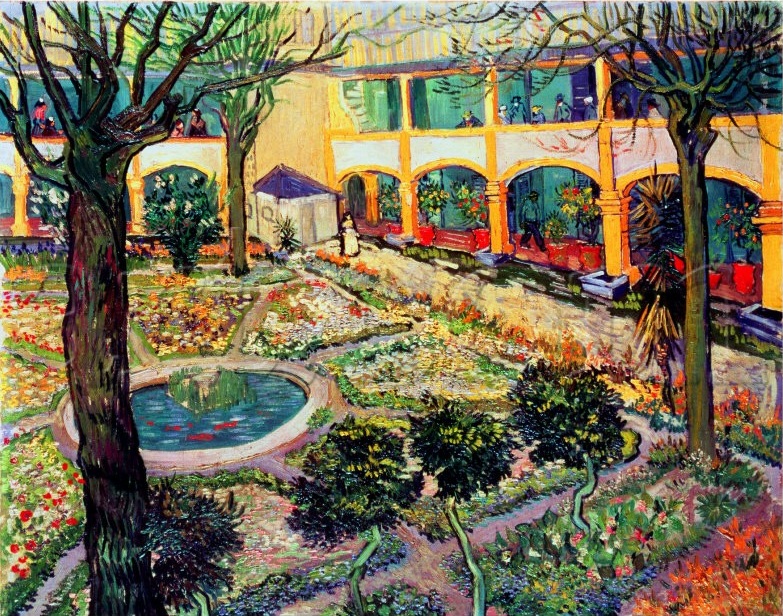 Van Gogh was hospitalized between December 1888 and January 1889 in Arles. Here he made two paintings, one of which depicts the hospital’s central garden – also known as the Courtyard of the Hospital of Arles. The other painting is representing the hospital’s ward. The method used on this reproduction is the same as our number nine.

4. Vase with Daisies and Poppies 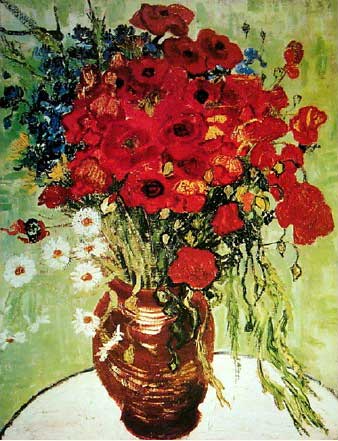 As we’ve mentioned in the introduction Van Gogh created a lot of still nature paintings, and this is just one of the many. The Vase with Daisies and Poppies is one of some thirty flower pieces created by the artist during the summer and autumn of 1886 while he was in Paris. The explosion of colors is undoubtedly recreated by this fine print. 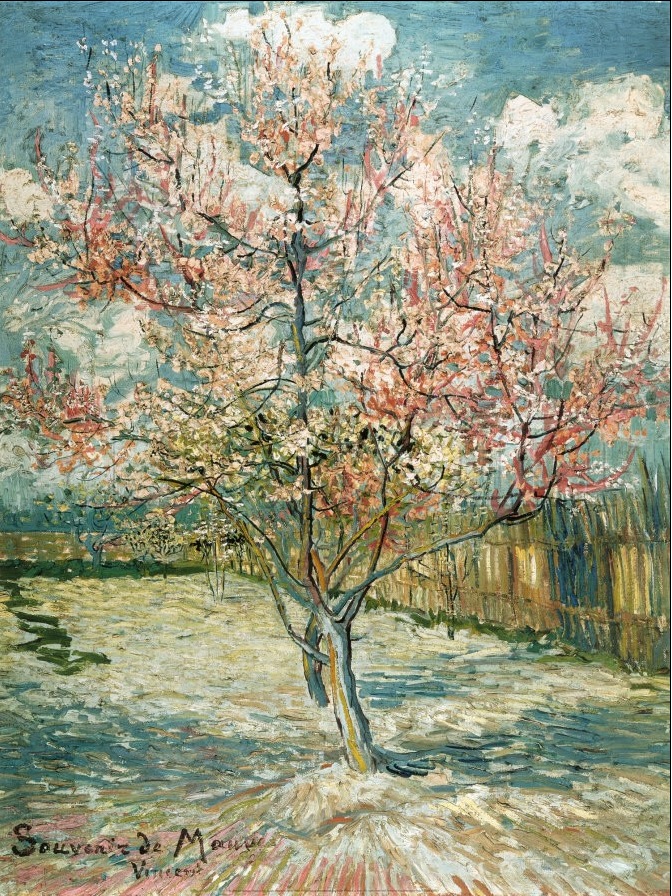 At first arrival in Arles Van Gogh saw the beautiful blooming trees and was inspired to create 14 paintings (nearly one painting a day) depicting peaches, plum trees and apricots. Van Gogh saw the flowering trees as a symbol of spiritual healing and renewal. The fine print is available in 23.5” by 31.5”.

2. Self Portrait with Grey Felt Hat 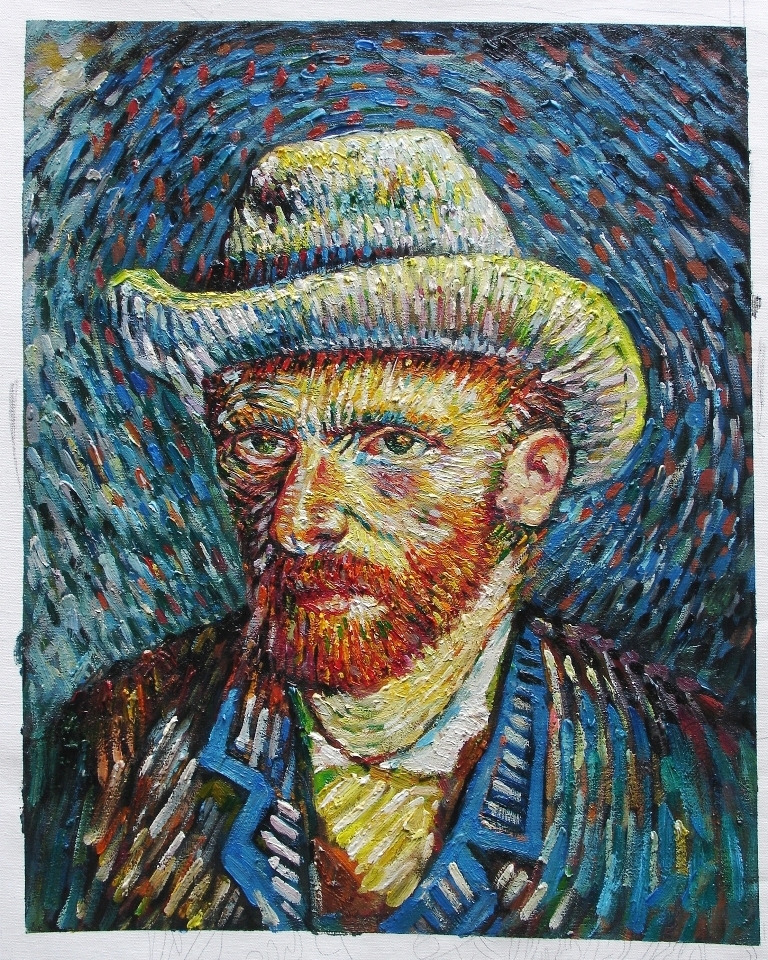 One of the iconic marvels Vincent had created during his short but full of events life is this self portrait, just one out of dozens he made during his lifetime. It is believed that he used a mirror to create these paintings, therefore his right side is actually the left side of his face.

We conclude our top of Van Gogh prints with yet another of his still life paintings representing blossoming Almond branches. This is but one of the several paintings he made between 1888 and 1890 in Arles and Saint-Rémy. Almond Blossoms was created with the intention to celebrate the birth of his nephew.

Which of these paintings slash reproductions is your favorite?