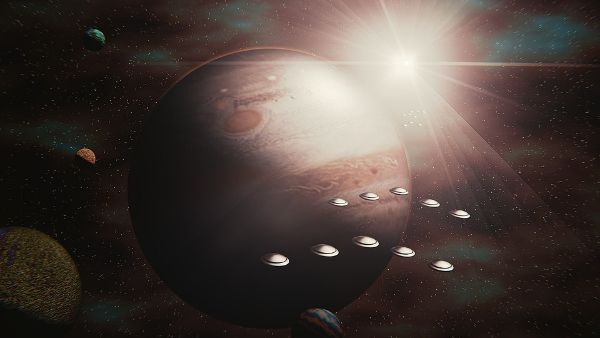 What have you been up to since the last time we’ve presented you with some space knowledge? Given how we found out that there is a legitimate mountain on Mars that’s miles long, among others, we assume that the rightful thing to do is to ponder on the significance of the human race in the infinity of the universe. But if you’re not here for this sort of profound existentialism and all you want are some cool facts about planets, you’ve come to the right place.

P.S. Before proceeding, make sure to read Part 1 of this fun-fact filled article.

#1 The highest point on Earth is represented by the peak of Mount Everest, which stands tall at 5.4 miles. On the other hand, the lowest point on Earth is called Challenger Deep and it stretches almost 7 miles beyond the sea level. It’s funny to think about the fact that not only did we manage to get to the top of the Everest, but that we’ve even managed to project ourselves into outer space. The mysteries underwater, on the other hand? They’re still mysteries.

#2 Mars presents the fiercest dust storms in our solar system. Because of its elongated axis and trajectory around the Sun, it’s essentially a magnet for disastrous dust storms which can last as much as a few months.

#3 Jupiter has the fastest rotation around its own axis. It takes the planet no more than 9 hours and 55 minutes to complete a turn. The velocity of its turning had a lasting impact on the appearance of the astral object. As a result, the planet has an oblate aspect.

#4 Saturn has the smallest density in the solar system. Given that it’s made almost entirely out of oxygen, its density is smaller than water. To get an idea of what this means, just consider that, technically, Saturn could float. Well, that’s if we were able to find a basin of water big enough to contain it, obviously.

#5 If you thought that Uranus and the element Uranium have something in common, you were right. The chemical compound was named after the planet, which had just been discovered at the end of the 18th century. Isn’t this a bit unjust towards the rest of the planets with no representation in Mendeleev’s element table?

#6 Neptune was initially called Le Verrier, after the one who had discovered it. Out of aesthetic reasons, we assume, the name was dropped and traded for Neptune in order to match the deity thematic. It’s really fitting too, given how Neptune is the God of the Seas, the Roman equivalent to the Greek Poseidon.

#7 Opposite to Saturn, Mercury is the second densest planet in the solar system, with Earth being the first. This is because of Mercury’s composition, which consists mainly of heavy metals and rock, characteristics typical to terrestrial planets.

#8 Venus used to be referred to as the “morning star” and “evening star.” Because of the position of its orbit, ancient civilizations believed that it was two separate stars that were visible at dawn and, respectively, sunset.

#9 Jupiter is a moon hoarder! There are a total of 67 moons that serve as satellites around the giant planet. This includes the four moons that Galileo discovered, which served as irrefutable proof that the Earth isn’t actually the center of the universe.

#10 The large amount of helium in its atmosphere and its gravitational compression make Saturn able to give off more energy than what it receives from the Sun.