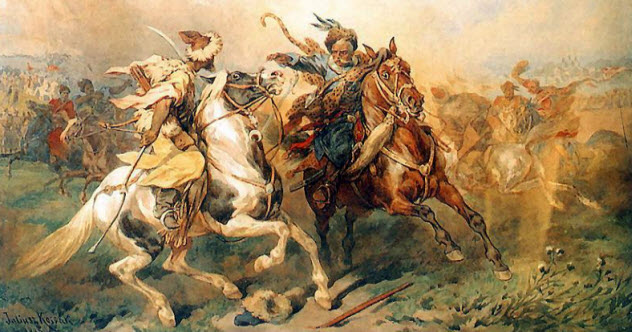 When we think of kingdoms and empires, our first thought usually goes to the Romans or Ottomans. History often remembers only what it wants to remember, people or entire civilizations getting lost in the sands of time. This is why chances are you’ve probably never heard about these 10 Great Kingdoms Forgotten By History.

Lithuania is a fairly small East European country, so to hear that it used to be one of the most powerful kingdoms during the medieval era may come off as a bit surprising. Initially a conglomeration of independent tribes, they eventually united under the lead of King Mindaugas. After that, it was only a matter of time before the duchy was conquering most of the European territory, including chunks of present day Russia. The downfall of the kingdom was the result of a succession of weak rulers, who allowed Lithuania’s power to slip into the hands of their then ally Poland.

Once considered the “kingdom of kingdoms,” the Merovingian Dynasty was an empire that, for a long time, occupied most of the European territory. It was located on the grounds of France, with the Merovingian rulers being considered the first French kings. Essentially, it was composed of multiple kingdoms, each led by its own king that, however, was subordinated to the head of the dynasty. This very form of organization is what sent it on the way to damnation. Affected by the constant civil wars raging through the empire, the royal house eventually starting losing power. After a while, the Merovingian Dynasty had disappeared completely.

After the Turkish prince Babur had lost control over his Asiatic kingdom, he was led by his thirst for power to northern India. He took the subcontinent for himself, only losing it for 15 years to Afghanistan rulers. However, once they were dethroned, the Mughal Empire became a constant presence in India, being one of the most powerful governments on the territory for centuries. Unfortunately, India was India, and just like the rest of the subcontinent, the Mughal Empire was gravely affected by the British East India Company. After the British Crown had claimed absolute control over India, the destruction of the kingdom became an imminent reality.

There was once a hugely powerful empire, known as the Mongolian Golden Horde. For decades, they led nomad lives, conquering territories wherever they went. At some point, however, certain members grew tired of participating in conquests, and of the general Mongolian lifestyle. They split from the Golden Horde, crystallizing a kingdom of their own: the Crimean Khanate. The khanate was in conflict with the Ottoman Empire and Muscovite Russia.

Although it lost battles against the former, big portions of the Muscovite territory fell under the control of the Crimean forces. Unfortunately for them, Russia started growing in power. Soon enough, it turned the odds in its favor, conquered the Crimean Khanate, and annexed it as a constituting part of Russia. Today, this is the source of an actual conflict raging between Russia and Ukraine.

An empire that matched the power and fame of the Romans was definitely the Byzantine Empire. After it collapsed, it scattered into multiple independent states, and Trebizond was one of them. This kingdom wasn’t an exceptional military force, but it had an incredible strategic position, being located right next to the Black Sea. This allowed for trade control. Also, Trebizond often mediated conflicts between Europe and the Orient.

When the Ottomans started becoming a real threat, Trebizond joined forces with other Asiatic countries to try and put an end to their expansion. This turned out to be a terrible idea, as the Ottomans responded with a smashing counterattack, eventually annexing the kingdom to their territory.

The Chola Dynasty was one of the longest lasting empires in Southern India. Their prestige came from their astonishing military power, recognized and feared by many other Indian kingdoms. During the peak of its glory, the influence of Chola stretched far beyond its borders, entering the territories of the Maldives, and various Southern African countries. Since nothing lasts forever, their infamous army’s power began to falter, as repeated attacks from other kingdoms were shrinking their territory more and more. The Chola Dynasty ended as a result of several factors, including their choice to split from the central government.

For centuries, Aragon was a powerful kingdom that controlled most of the Mediterranean territories. Considered to be the nucleus around which Spain was formed, it was the result of a union between Catalonia and the Kingdom of Aragon. For many years, the empire’s influence gravitated around the area of Mediterranean Spain, as well as Italy.

The War of the Spanish Succession is what triggered the kingdom’s downfall, as Aragon eventually succumbed to the control of the newly unified Spanish forces. Although it remained semiautonomous for a century after that, it was eventually wholly incorporated in Spain in the first half of the 19th century.

Many great empires were born before the rise of Islam in the Middle East. And, although widely forgotten by the public, the Sasanian Empire was one of them. This kingdom stood out through the fact that it was wholly dedicated to the religion of Zoroastrianism, an incredibly old belief system that worshiped the wise deity Ahura Mazda.

The Sasanians followed a policy of military expansion, which led them to seize control of most of the Middle East, as well as Egypt. Unfortunately, they ended up getting attacked by the expanding Byzantine, respectively Muslim, Empires, something that led to their decline, as well as to the disappearance of Zoroastrianism.

9. The Kingdom Of Strathclyde

After the Roman Empire disintegrated in the British Isles, many new kingdoms emerged as a result of the formed power vacuum. Strathclyde was one of them, crystallizing in Southern Scotland. The main focus of the kingdom was to maintain and preserve its own civilization. This is something that helped Strathclyde offer better living conditions at the start of the Dark Ages. It was the Vikings who led to the collapse of the kingdom. They weakened its power to the point where the last independent king willingly submitted to English control.

The Visigoth Empire was a conglomeration of Germanic tribes which were contemporary with the Romans. They were famed warriors who were feared even by Rome. The Romans and Visigoths struck an agreement in which the Visigoths were allowed to form an empire in Europe in exchange for military assistance, should Rome ever need it. Torn by internal conflicts, the Visigoth Empire became vulnerable enough to allow the Muslim invaders to march an attack on them.

As the years pass, even the big events get erased from our memories. These 10 Great Kingdoms Forgotten By History are no exception.