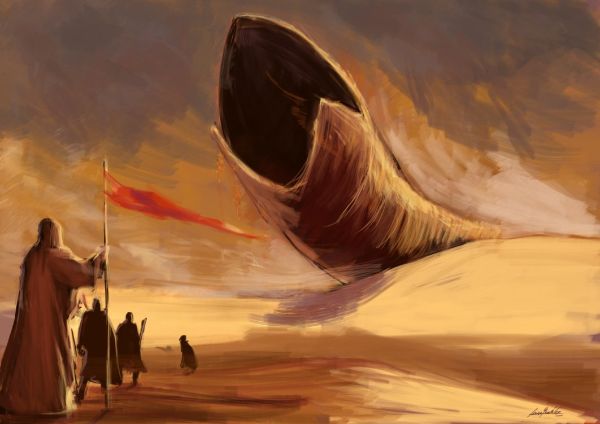 Works of fiction have seen a significant growth in genres over the years, something that can be attributed to the popularity that they encountered one day, and hasn’t wavered since. Many of us turn to books and, well, stories in general as a means of escapism that is both handy and enthralling. But what exactly does “fiction” refer to? I’d say, pretty much anything that you can’t encounter on a trivial run to the corner shop. How drastically different from our life a fictional universe can be, though, greatly depends on the story you’re getting invested in. However, no world is more descriptive and engaging than the one of science fiction. For decades, the prospect of reading about a distant future founded on a very likely scientific basis, has kept readers engaged in the genre and it led to a boost in popularity. Some of the best series and franchises today are of sci-fi nature, perhaps Star Wars being the best representative. As far as books are concerned, there have been many science fiction novels along the history, but there are some that simply stand out, and that we’ve included in a list of 10 Must Read Sci-Fi Novels.

The Forever War is an award winning literary piece, which presents the interstellar war between the human race and an alien race known as the Taurans. So far, so good, right? Not precisely. Haldeman managed to help the book stand out by offering an interesting perspective: rather than focusing on the battlefield, he brings the reader’s attention to the consequences of war. Mixed with intergalactic space fluctuations, adaptability issues and theories that it silently reflects the way the Vietnam war veterans were treated in the 60’s, The Forever War is a complex work of fiction that is definitely worth its awards.

What really made Slaughterhouse-Five stand out was a bevy of unconventional elements. It tells the story of a chaplain’s assistant, his name Billy Pilgrim, and his journey through the events of World War II. The interesting aspects of the book are many: one of them is the fact that the narrator isn’t Billy himself, but someone observing him from the side. More than that, Vonnegut adds a complicated twist by constantly shifting between moments of Billy’s life, who is able to experience different periods in time as if they are all happening at once. Top this with theories that his time sensibility and his alleged alien abduction are only a mechanism of coping with the slaughterhouse itself, and you have yourself a fascinating novel.

3. A Canticle For Leibowitz

A Canticle For Leibowitz depicts a post-apocalyptic world, where those who’ve survived the nuclear war known as the “Nuclear Deluge” have banned everything that has to do with learning and knowledge. The story follows a group of intellectual monks, called the Albertian Order of Leibowitz, as they aim to preserve artifacts of culture and knowledge in a world where intellectualism is punished by death.

The story of We presents to the reader a dystopian world, with the focus on a wholly glass made metropolis called One State. The citizens are constantly monitored by a secret police and the mysterious, superhuman figure behind it, only known as “The Benefactor.” Although initially the protagonist, D-503, appears to be fully submissive to the system, his affiliations eventually lead him to a divergence in ideologies and defiance. If it sounds similar, this is because if it weren’t for We, we probably wouldn’t have 1984 today.

5. The Hitchhiker’s Guide To The Galaxy

Works of science fiction don’t always have to be grim and tense. Adams proved that when he adapted a novel from the BBC 4 broadcast of the same name. The book follows the story Arthur Dent, the last surviving human after the annihilation of Earth, who discovers the planet of Magrathea and who, along with various travel companions, seeks to find the answer to the ultimate question. All of the events are written in a quirky, satirical tone, which makes the novel quit like no other.

The Blind Assassin takes less focus on the raw side of sci-fi, and instead shines light on the more human side of it. The main story follows two protagonists, Laura and Iris. Laura herself has written a novel centered communist sympathizer Alex Thomas, who in turn is the author of the story that the novel bears the title of. Thomas’ book tells the tale of a sci-fi world where children are used as slaves that tailor carpets until they turn blind.

If you liked George R. Martin’s A Song of Ice and Fire, then Dune is the next must read sci-fi novel on your list. It focuses on the noble family Atreides, now stewards of the planet Arrakis, but similarly to the former mentioned the focus action is around the political strategies, betrayal and allegiances of multiple noble houses.

8. Do Androids Dream Of Electric Sheep?

One of the starting points of many other creations that tackle similar principles, Dick’s novel primarily focuses on two protagonists, one of which is a bounty counter meant to exterminate runaway androids. In the process, however, he begins to question his principles, as he starts to empathize with the ones he’s meant to eliminate. Another great plus is the fact that this novel inspired the much acclaimed movie Blade Runner.

9. The Left Hand Of Darkness

Le Guin’s novel is set on a planet called Gethen, most commonly referred to as Winter, and it follows Genly Ai, a native who has been ushered to convince the inhabitants of Winter to enter the coalition of humanoid planets. Not only is he turned down, he is also arrested and thrown into forced labor. What really makes this novel shine, though, is its incredible depiction of sexuality, with the inhabitants of Winter being described as carrying both feminine and masculine traits.

One of the most iconic works of literature of all time, Brave New World has introduced to the world a complex story, founded on controversial concepts. The story is that of a society in which citizens are ordered in hierarchies that determine their roles, and where natural birth has been completely abandoned, and replaced by duplication from artificial “batches.” The plot is much more than that, though it mostly shows us the story from the eyes of John, one of the few people who have been born naturally, as he grows more and more repulsed by this lifestyle.

If you’re big on digesting as much of the sci-fi genre as you can, make sure you’ve approached all of the books on this list. If you’re just a newcomer, then these 10 Must Read Sci-Fi Novels are definitely your best starting point.