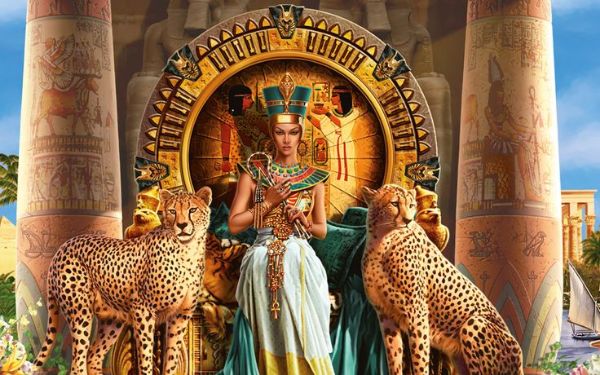 In the year 3400 B.C. two distinct kingdoms were established. The Red Land formed northwest of the Nile River Delta and the White Land emerged in the south, stretched all the way to Gebel el-Silsila. Three centuries later, King Menes put an end to the constant conflict gnawing at both sides. He seized the Red Land, unified it with the southern kingdom, and became the first dynasty king of what we know today as Ancient Egypt.

Few civilizations have left such a cultural mark on history the way Ancient Egypt has. From the glorious pyramids to the unique alphabet and to the easily recognizable art, fashion, and traditions, it lived on long after Alexander the Great’s conquest. Should you want to introduce others to the wonderful world of one of Earth’s greatest cultures, here are the Top 10 Ancient Egypt Facts You’ll Want to Share With Your Friends.

#1 The Egyptian make-up style is widely known today for its sharpness and boldness. However, women weren’t the only ones who wore the striking eye make-up. Men did too, something that happened because the eyeliner had more of a practical purpose rather than an aesthetic one. The paint was either black (made from lead) or green (copper) and it was mostly used as protection against the sunlight. Also, Ancient Egyptians believed it had healing powers.

#2 Another trademark of the Ancient Egyptian civilization is the concept of mummification. It’s important to keep in mind that not everyone benefited from his honoring process. It was solely reserved for pharaohs and the highborn, wealthy families as it was believed that life after death was possible. Or better said, it was only possible if the body stayed intact and recognizable. While the mummies were buried in coffins inside tombs, the rest of the Egyptian people were simply buried in pits in the desert. Ironically, through constant exposure to the dryness of the desert, the latter option did a much better job at preserving the bodies.

#3 Members of highborn families partook in a strange ritual that aimed to honor the mummified dead. The tombs which fostered the mummies offered access to family members, priests, and well-wishers through an inner chapel. There, they gifted different kinds of foods that would later be consumed during an annual festival known as “the feast of the valley.” Since the food was only consumed spiritually by the dead, its physical consumption fell to the participants in the ceremony. Isn’t there something a bit unsettling about eating in the darkness, by the light of a torch, and in the middle of a tomb?

#4 Many Ancient civilizations actually gave women equal rights to men and Egypt was no exception. Both sexes were equal in the face of the law, something that gave the ladies a great amount of emancipation. They were allowed to own, buy, and sell property, they could raise their children by themselves, and they were actually expected to partake in business matters in the absence of a husband.

#5 Despite how intricate looking the famed hieroglyphs are they weren’t commonly used for writing. That’s because, as expected, they were very time consuming to craft, so they were only reserved for special occasions and important messages. Therefore, they mostly decorated the walls of tombs and pyramids and scribes used for other mundane tasks the hieratic alphabet, a simplified and quicker version of the hieroglyphs. Around the end of the dynastic period, they simplified the writing, even more, turning to the demotic alphabet. Historians estimate that less than ten percent of the population was literate and, thus, could read any of these three alphabets.

#6 Ancient Egypt was also a lot more permissive when it came to the gender of the ruler. Although they were still called “kings,” there have been women who were granted this position of great power. This happened when there were no men in the family that could possibly inherit the role. As a result, it was passed on to the women as a way to ensure the preservation of the dynastic genealogy. One of the most successful of these king-women was Hatshepsut, who managed to rule over Ancient Egypt for a grand total of twenty years.

#7 Speaking of lineage preservation, royal Ancient Egyptians were very fond of preserving the purity of their bloodline. This is why they were the only civilization at the time to not indulge into the traditional mentality of gifting to other kings the pharaoh’s daughters. They were meant to be wed within the family, often with their own brothers, to ensure that they would receive proper etiquette training. It wasn’t a compulsory deed, however. Many Egyptian queens, including the famous Nefertiti, weren’t of royal blood.

#8 Pyramid building wasn’t a tradition that lasted all the way to the end. It was a common doing among the pharaohs of the Old and the Middle Kingdoms, who believed that the pyramids would bring them closer to the Sun God Ra. The trend went out of fashion by the time the New Kingdom rolled in, with the pharaohs then opting to build two distinctive funerary monuments instead of one. They were buried in the Valley of the Kings, west of the Nile and south of the city of Thebes, with the royal mortuary court focusing on the imposing memorial temple between the cultivated land and the sterile desert.

#9 The Great Pyramid at Giza is one of the world’s greatest mysteries. Contrary to popular belief, the myth about the “100,000 slaves that built it” isn’t true. No, it wasn’t aliens or dinosaurs, but as scientific discoveries have shown, the construction seems to be owed to 5,000 salaried employees and 20,000 temporary workers. All of them were allegedly free men, summoned by the royal court to serve for a three-month shift and then allowed to return home with some money in their pockets.

#10 One of Ancient Egypt’s most distinguishable and iconic figures is the legendary Cleopatra. Not only a powerful ruler, she was also the thief of the hearts of Julius Caesar and Mark Antony, two men of incredible importance in Rome. Many have assumed that such a deed could only be accomplished by a woman of an enthralling beauty, but this theory flopped the moment historians discovered coins with her face embedded on them. The image depicts a woman with a crooked nose, with deep-set eyes, and a pronounced chin, something that falls short of resembling in any way Elizabeth Taylor. Researchers said that Cleopatra’s true charm laid in the way she made other people feel like they mattered. In other words, it’s what was on the inside that mattered.

These were the Top 10 Ancient Egypt Facts You’ll Want to Share With Your Friends. What are you waiting for, then? Go share them with your friends.