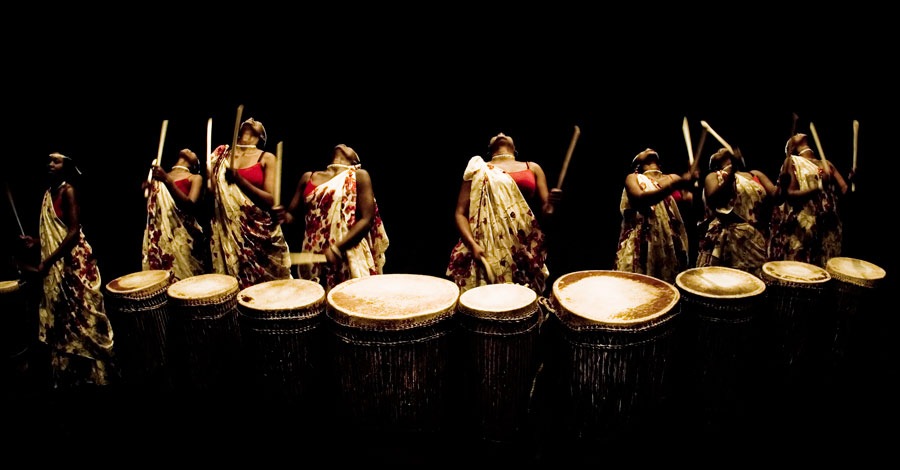 When it comes to music, it’s all about the rhythm. Whether it’s jazz or heavy metal, no musical genre is complete without a drum beat to give it unity and a sense of timing. From loud accents to soft brushing, a drum beat is what makes or breaks a song, so let’s have a look at some of the iconic drummers of our times and the gear they use to bring the groove.

Rush is probably best known for their hit song “Tom Sawyer”, in which Neil Peart used a beat that became iconic to his style. Inspired by famous drummers such as Led Zeppelin’s John Bonham (himself a drumming icon), Neil Peart used various gear throughout his career, and his set-up consists of an elaborate 9′ by 9′ 360 degree kit combining acoustic and electronic drums.  As for cymbals, famous cymbal makers Sabian created a special series for him, called Paragon.

Mike Portnoy is truly a modern drumming icon, his intricate style and speed making him a legend among progressive drummers. He is best known for his activity within Dream Theater, and his most famous setup is called “The Siamese Monster” – a huge kit consisting of three bass drums, two snare drums, six octobans, five rack toms, one timbalio, one floor tom, one tympani and one gong bass drum, all top of the line Tama Starclassic Maple. The cymbals setup is equally intricate and consists of a total of 21 cymbals from Sabian.

Even the most profane music listeners have heard a Metallica song at least once in their life. Lars Ulrich brings his personal style to the band, creating drum beats that are recognizable, memorable and aggressive. Just like Portnoy, he rocks a Tama Starclassic Maple kit consisting of two bass drums, two floor toms and two rack toms, along with a bell brass snare drum. His cymbals of choice are Zildjian – a total of 9 cymbals guaranteed to bring the noise!

Although Danny Carey worked with many bands during his career, none became as famous as the Grammy Award-winner progressive metal band Tool. He is a very technical drummer, greatly influenced by jazz music, and his technique includes frequent use of polyrhythms and odd time signatures. His drum-maker of choice is Sonor, and his setup is entirely made of bronze. Two bass drums, two rack toms, two floor toms and a snare, along a collection of 17 Paiste cymbals are the tools of the Tool drummer (pun intended!)

Nicknamed “The Godfather of Double Bass” by Drummerworld, Dave Lombardo is known for his speed and aggressiveness, as well as his preference for using two bass drums as opposed to a double pedal on a single bass drum. It comes as no surprise that his drum kit is a Tama Starclassic Maple, consisting of two bass drums, hand hammered snare drum, six rack toms and two floor toms. Ten powerful cymbals by Paiste complete this noise-bringing machine.

Phil Rudd is best known for his iconic time signature and simple yet powerful beats that made Ac/Dc the hard rocking idols of two generations (or more). His current set-up is a Sonor Designer Series shell set (one bass drum, two rack toms, one floor tom)  and two snare drums – one, his own custom signature snare and the other, a Horst Link signature series snare. 8 Paiste 2002 series cymbals insure that your highway to Hell is paved with ear-bleeding beats.

Ever felt a fear of the dark creep up your spine? Well, if so, Nico McBrain was probably banging his drums in your head to that fear and you were thoroughly enjoying it. Iron Maiden’s drummer stubbornly refused to use a double pedal or two bass drums and subsequently became famous for developing speedy beats with the use of just one pedal. His kit is a Premier Maple Classic with eight rack toms, one floor tom, one bass drum and Paiste cymbals.

The funky, unmistakable rhythms in every RHCP song are the creation of Chad Smith, a drummer so groovy you just can’t resist dancing to the beat. His kit is as special as he is, since it’s an acrylic kit (as opposed to wooden or metal kids): the Pearl Acrylic consists of two floor toms, one rack tom and one kick drum, alongside a Pearl Ultracast or a Pearl Sensitone Elite snare drum and an auxiliary free-floating acrylic snare. Cymbals are from the AAX and AA series of Sabian and even though there aren’t many (only six) – Chad Smith will use them to the max and definitely get your groove on!